Rellik: The TV show that gives you everything back except your time

The gimmick in Rellik is to tell a detective story in reverse. It’s not too late to back out now 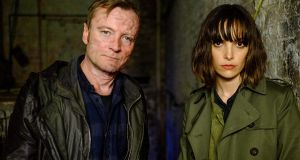 How did Richard Dormer’s agent not talk him out of playing the lead?

Here’s an old joke: What happens if you play a country song backwards? You get your wife back, your truck back and your dog back.

Hoary as this gag is, it’s still a pithy rumination on the inflexible expectations of a well-trodden genre and the limits in rejigging them. In Rellik (BBC One, Monday, 9pm), we get a detective drama told in reverse, in which we get the killer back, the victims back and the motive back; everything except our time.

The technique is familiar from the vastly superior Chris Nolan film, Memento, told in receding chapters, which made memory its subject within the riveting excavation of a murder mystery. In writers Harry and Jack Williams’s new show, we are similarly borne back ceaselessly into the past, guided by title cards of almost autistic precision (“10 hours and 28 minutes earlier”, “3 hours and 33 minutes earlier”) in the hope that their detective drama will work something like a palindrome, as gripping to observe backwards as forwards. Dammit I’m mad.

There are, of course, narrative complexities to master as a result of the shift in direction: like Harold Pinter’s play Betrayal, the untangling of an affair that begins with its ending and ends at its beginning, there are clues and details to ration. But there is also a grating sense of automatic mystery in reverse chronology, which endears it to hacks: How did this bottle shatter? Why is this person cross with that person? How did Richard Dormer’s agent not talk him out of playing the lead?

Beyond the gimmick of Rellik’s telling, Dormer’s DCI Gabriel Markham is a straight-forward cliché: another difficult male, hard drinking, harder growling, driven by reflex “nothing is that simple” scepticism, prone to dangerous liaisons with his subordinates and fiery arguments with his superiors. In another blunt reversal this detective is also, yes, a victim.

Markham’s face has been burned and crinkled in an acid attack by the very man he’s chasing (this, metaphorically, is himself, although, more worryingly, it is probably also literally himself – Rellik doesn’t have many interesting characters). But a face that resembles a shaved scrotum is not quite as disfiguring as his tendencies towards two-bit philosophising. “If we could go back far enough, we could understand why people do what they do,” he explains to some DI Cipher. “If we understood their motives, maybe we wouldn’t spend so much time chasing our own tails.”

That is Rellik’s MO, which will clearly spend a lot of time chasing its tale. I can’t say I’m looking forward to it.