Back review: The Peep Show duo are now a fully mature odd couple, prone to looking back, in Simon Blackwell's new comedy 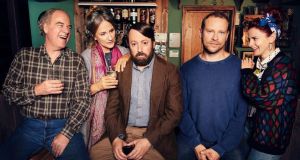 ‘Listen carefully and you can hear Mark and Jeremy cackling’

Eventually – and to the minds of its devoted followers, lamentably – Mark and Jeremy had to move on.

These were the exquisitely pathetic London flatmates at the centre of Peep Show, a gloriously comedy about individual perspective devoid of self-insight. Filmed from the point of view of everyone who appeared on it, whether speaking part or passing extra, Peep Show’s structural gimmick never wore thin. Why would it? In our heads, we’re all at the centre of the universe. Or, at the very least, a fixed-camera comedy.

Two years since Peep Show reached its near conclusion, its leads David Mitchell and Robert Webb have returned with a new vehicle, Back, whose name clearly understands the significance. Created and directed by Simon Blackwell, one of the most accomplished comedy writers working in Britain and beyond, it feels like a logical successor, keeping Mitchell and Webb in identifiable magnifications of their own well-understood personalities: an odd-couple pairing of insecurity and insincerity, emotional paralysis and emotional fluency, small thinking and inflated ambition.

It would be refreshing to see Mitchell and Webb switch their stereotypes, but versatility is not the calling card of popular comedy: they are now a reliable product, tweaked to satisfy expectations. So Mitchell plays Stephen, a buttoned-down and newly bereaved middle-aged man, whose father’s death leaves him with the immediate upheaval of having to calculate how many sausage rolls a funeral requires, and whether the family pub he will inherit, in rambling West Country England, can finally branch out into static caravans. “We could really start moving forward.”

That is not Blackwell’s imperative, though, who uses the first episode to set out his stall, introducing us to characters and devices.

There are two potentially grating ones thus far: a nostalgic gust that periodically shows us Stephen as a boy among adults, shrunken beside them in his mourning suit, or that plunges him into childhood memories, full-grown and big-bearded, to relive his formative, stunting experiences.

The second device is just Webb, playing a glib charlatan sociopath (“Is this a Martin Guerre thing?” asks Stephen), a former foster child who has returned to insert himself into the family like a cuckoo in the nest.

The show lives in the dialogue, though, which slips out with so many barbs it could rip a hole in the screen. Late in the episode, it finds its stride, hitting a din of disbelief and exasperation, and everything gets caught in the fray. Stephen’s sister enthuses that their sleepy town now has its own music festival, with four stages. “Like cancer,” seethes Stephen.

Somewhere, Mark and Jeremy are cackling.

Poem of the week: Phenomenon
Real news has value SUBSCRIBE