Irish people will discuss anything other than what they earn

What Are You Working For? Philip Boucher Hayes explores issues around salaries in Ireland

Philip Boucher Hayes discusses wage packets in the RTÉ documentary "What Are You Working For?". Video: RTÉ 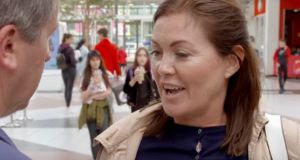 In What Are You Working For? Philip Boucher Hayes finds people willing to talk about their earnings. Photograph: RTE

Irish people would rather talk about virtually anything other than how much they earn. This becomes crystal clear just seconds into Philip Boucher Hayes’s What Are You Working For?, in which a series of unidentified people are paraded in front of the camera just so they can refuse to tell the presenter how much they make.

Their refusal seems fair enough as, over the course of the hour-long programme, Boucher Hayes does not tell us how much he makes either. He doesn’t even give us a hint.

He does start off by telling us that the “big picture is that we are told we have left the Great Recession behind ... but what does that mean for our pockets?”

What indeed? We are given an idea how much our salaries stack up against our those of our neighbours. Earn 25 grand and you are ahead of 30 per cent of the workforce. If you make €50,000 you are bang in the middle, and if you earn €100,000 you are in the top 5 per cent.

Then there is a short history lesson featuring obligatory clips of men in cloth caps, barefoot children gambolling in fields, tractors, washerwomen, men and women looking forlornly back at Ireland as they make their way across the water in cold-looking boats, and other stock images we identify with the 1930s and 1940s.

Fast forward a few decades, and the cloth caps and cold penury are replaced by shots of a brave new world in which the star players are Facebook, Google, Apple, Intel, Dell and the other multinationals who started arriving here in the 1950s, after Ireland “tattooed I heart globalisation” on its arm, as economist Stephen Kinsella puts it.

When the high-tech sector is discussed there are references to salad bars, ping pong and break-out rooms “not where people to get a rash,” Boucher Hayes explains helpfully.

Several companies agreed to take part in the programme including global aviation leasing company Avolon, financial services company Accenture and California-born biotech company Biomarin, but it is hard to escape the notion that they have put on their Sunday best for the guy from the telly and that we are only getting a tiny glimpse into their world, at the things they want us to see.

Staff put forward to represent the three firms talk about their holistic hiring policies and the determination of millennials to change the world (unlike the layabout generation Xers, presumably) and the yoga classes and the meditation and mindfulness and the travel and the excitement of working across multiple time zones.

They all get a whole lot cagier when Boucher Hayes starts asking them about how much they earn and how much of a pay cut they would be willing to take just so they could still come to work in a place with a mindfulness room.

While finding people who will talk about their earnings is hard, it is not impossible, and Boucher Hayes finds a small group willing to talk about cold hard cash. There is a teacher, a doctor, a paramedic a person who used to wait tables and someone working part-time in retail.

They are all surrounded by piles of money which Boucher takes from them to represent how much they pay in tax, mortgages, groceries and all the rest.

None of the people have much left at the end of the process.

There is a nod to the “gig economy”, when a former Deliveroo employee says his terms saw him switch from an hourly rate of €9 plus €1 per drop to €4.25 per drop. He left because, as he said, it put too much pressure him and he felt that the company did not really look after its employees.

In a statement given to the programme, Deliveroo denied this and said that under a new system staff earned €11.50 an hour. It pointed to a survey of staff it had carried out that suggested they were delighted with the arrangements because of the flexibility it gave them.

There were references to public-sector versus private-sector jobs and to the real problem of wage and opportunity discrimination against women, although given this was a whistlestop tour through the job sector, it was impossible to give either topic much of an airing.

One depressing nugget highlighted the fact that gender discrimination exists somewhat independently of childcare and maternity and is also down to the facts that “men hire people like them” and that the gender stereotypes start early.

At the end of the programme comes a twist of sorts. Boucher Hayes offers all those who had agreed to talk about their earnings a hypothetical job which would earn them twice what they are on now but without any social interaction or anyone apart from themselves knowing what they did or if, indeed they did anything.

They all turned him down which neatly proved his central thesis that “job satisfaction and the company of colleagues adds up to a whole lot more than the sum of our payslips”.

The Beatles split: ‘I was shattered’ – Paul Weller, Booker T and more on the the band’s abrupt end
10