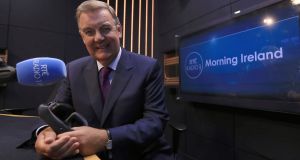 RTÉ presenter Bryan Dobson will continue to be a key presenter for its television coverage of special State events including the forthcoming budget after he moves to Morning Ireland. Photograph: Donall Farmer

After 21 years behind the desk, Bryan Dobson is leaving RTÉ One’s Six One News programme to join the team of presenters on RTÉ Radio 1’s Morning Ireland. The 56-year-old broadcaster will move to the country’s most popular radio programme at the end of October, joining co-presenters Rachael English, Dr Gavin Jennings and Audrey Carville as a main anchor.

RTÉ has said Dobson will continue to be a key presenter for its television coverage of special State events including the forthcoming budget.

Speaking about the move on Monday, Dobson said: “I will greatly miss Six One News but there comes a time to move on and grasp new opportunities. Morning Ireland is the country’s most-listened-to radio programme with an audience that is highly engaged in the debates, arguments and discussions that make up the national conversation.

“Over many years presenting Six One News it has been a privilege to work alongside so many talented and committed colleagues to deliver accurate, relevant and engaging news to our large audience. I thank our viewers for their loyalty and my colleagues for their professionalism and cheerfulness.”

Dobson joined RTÉ in 1987 as a reporter with RTÉ Radio 1’s This Week programme, becoming business correspondent and presenter of the television business programme Marketplace. In 1991, he became presenter of RTÉ’s One O’Clock News, later moving to present the Nine News programme before being appointed as the Six One News anchor in 1996.

Figures released recently by RTÉ showed he ranked among the broadcaster’s top earners, with an annual salary of €195,816 in 2014, and there was some controversy when it emerged that his co-anchor, SharonNi Bheolain, was paid considerably less.

Dobson will continue to co-present the Six One News until late October, when he joins the Morning Ireland team. RTÉ has not yet announced who will succeed him on Six One News.