A night in with the mammies and besties: Gogglebox Ireland returns

Gearing up for the next season of the TV show are Irish participants including two ‘sisters’ from the Liberties, a Nigerian-Irish family and two Dublin buddies 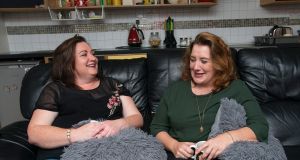 “We’re both born and reared in the Liberties and not leaving anytime soon,” Anita Reilly says with a laugh as she pours herself a cup of tea in her best friend Tracie Reid’s house.

Settling down on the black leather sofa with their tea and biscuits, the Dublin women, who are both in their forties, have lived in the heart of the Liberties since the 1970s. They refer to each other as “sisters” and are just two of the groups taking part in TV3’s Googlebox TV show.

Googlebox Ireland returns for a third season with opinionated and avid television viewers giving their views on some of the most memorable television of the week.

Fame doesn’t faze these women, who say they represent the “real community behind the Liberties”.

Reid and Reilly grew up in Dublin 8 in the 1970s, and say while the area has changed, the essence of the people is the same.

Reid and Reilly are firm favourites with viewers for their tongue-in-cheek chat on the sofa. They holiday together all the time, either heading to a mobile home in Donabate or taking an occasional trip to Spain.

“I have known her all my life,” Reilly says, pointing to Reid, “but I wouldn’t hang around with her when we were younger as she was too rough for me.”

Not one to take a knock from her best friend, Reid says her friend was equally as bold when they were growing up just off Cork Street.

“Our parents knew each other, so we all were reared together,” says Reid.

Before the cameras start rolling in Reid’s home, Reilly makes sure the production crew behind the series all have a cup of tea and a biscuit.

“Tracie is more an egg and chips kinda gal but I like to cook,” Reilly laughs.

The only thing that the women disagree on is Reid’s pets, otherwise known as Kenny Dogleash and Bibby the Cat, who can be a bit “too friendly” for Reilly’s liking.

“Kenny Dogleash was slobbering all over me during one of the episodes and Tracie wouldn’t believe me until we watched back the episode. If it was one of her kids being rude to me she’d throw the slipper at them, but when it comes to the dog, it can do no harm,” Reilly says.

When asked about changes to life in the Liberties, the upbeat duo looks at each other before getting serious.

“Not everything in life is rosy. There have been a lot of suicides and pressure put on people with finances and drug issues. The people are very strong here and there a lot more decent hard-working people in the Liberties. I think the outside world misjudges us a lot of the time,” says Reilly.

However the notion of being new found “celebs” is lost on the pair, who love to watch Fair City and Eastenders when not in front of the cameras.

“Would you go away out of that,” says Reilly, “the real queen is Imelda May after her belting out the national anthem for the McGregor fight.

“People love to see that we are real locals and mammies and that the kids go to the local schools,” Reilly says.

“Sometimes you get people stopping you on Meath Street but more often when we’d be inside in Penneys. We get a lot of stares and more often than not if I see someone staring at us, I go up to them and ask them do they want a selfie,” says Reilly.

From Nigeria to Navan

Life in Navan is a little different to that of the Liberties backdrop. Yemi and Deji Adenugas moved to Ireland in 2000 and after a brief stint in Dublin they settled into life in Co Meath in 2004.

Mother of four Yemi is a prominent figure in African-Irish society, through her involvement in the National Women’s Council, Cultúr Migrants Centre and the African Women’s Development Initiative.

Her husband, Deji, is a well-known Nollywood actor, who splits his time between Ireland and movie sets in Nigeria. When he’s not on stage or screen, he loves to travel.

The family who “took a chance” on appearing on Googlebox Ireland say they have no regrets about inviting the cameras into their livingroom.

“This is my 17th year in Ireland, so I don’t feel like an outsider anymore,” Yemi says.

“I finally feel at home now but if you had asked me a few years ago, I might have had a different answer. I worked in broadcasting in my home country so it took me time to settle into this new environment. We got asked things like ‘did you swim here’ or ‘can I touch your hair’ but thankfully things like this don’t exist anymore. People are finally used to seeing coloured people and this has been one of the greatest changes in Irish society for me,” she says.

The Adenugas have four children: Loretta, Aishling, Sitzdegi and the youngest, Cephas. Aishling is the only one of the couple’s children born in Ireland; the couple had their other children in their native Nigeria.

Yemi met her husband in 1985, when he spotted her at choir practice in their local church in Nigeria. Although she was surrounded by her many sisters, he wasn’t intimidated and began to chat her up – which Yemi says took a good deal of bravery. “We married in 1992 and settled into family life right away. Our oldest daughter Loretta got married last year in a traditional ceremony in Nigeria but now lives in Drogheda with her husband.” Although, “she still comes home every evening after work for dinner”.

“Our daughter Aishling is the only one of our children that was born in Ireland and she will kill me if the ‘h’ is not put in her name,” she says.

Ireland is now home for the family who say they have become local celebrities in Navan.

“When I lived in Dublin I would only ever say hello to my neighbours every once in a while, but up the country in Navan this is all different. We are a community who knows each other. I come from a background in Nigeria where everyone knows each other but that never happened for me in Dublin. I found that here in Navan,” Yemi says.

Back in Dublin, best friends Dave Baxter (28) and John Sullivan (35) often get confused for a couple.

“Everyone thinks we are a couple but sorry to disappoint, we’re just best friends,” Sullivan says.

“We have known each other since 2011 and we met through an ex-partner. After they broke up, I got Dave,” Sullivan laughs.

Sullivan works in a post-production house and once appeared in the red chair on The Graham Norton Show.They got involved with Gogglebox after Sullivan expressed interest in doing some post-production work on the series. “Then I was approached to be a participant and I convinced Dave that it was a good idea,” he says.

While Sullivan had no apprehension about appearing on the show, Baxter shakes his head in disagreement, saying he was a little sceptical of voicing his opinion on the TV.

“I was a bit apprehensive but after the first few episodes and all the positive feedback, I settled down.”

The friends are gearing up for the season three premiere next week. “I’m not afraid of what people think of my opinion, and I doubt anyone that is involved in the Brexit talks is paying attention to what the two of us say. I don’t think Simon Coveney is going to be ringing us for our input anytime soon,” says Baxter.

“Each one of us has a different opinion and we represent different demography of an ever-changing Ireland. This is the magic of the show and why it works so well,” says Sullivan.

Cancel culture: can you defend people who say unpopular things?
10