RTÉ's Late Late Show has been criticised for displaying a map of Ireland with the six counties of Northern Ireland greyed out during a segment with Dr Eva Orsmond on cancer figures. Video: RTÉ 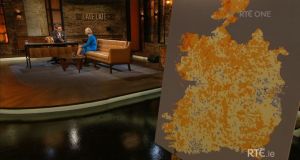 The map of Ireland used to illustrate a piece in which Dr Eva Orsmond spoke about the greater risk of cancer for people who live in deprived areas of the country. Image: Screengrab from RTÉ Player

The Late Late Show returned for its new season on Friday night – and immediately caused a storm of protest on social media.

The object of irritation was a map produced to illustrate a piece in which Dr Eva Orsmond spoke about the greater risk of cancer for people who live in deprived areas of the country. Dr Orsmond said less educated people tended to be slow in going to their GPs and as a result had poorer health outcomes.

She mentioned Ballymun in north Dublin where she said waiting lists for diagnostics could be up to two years, by which time cancers could have progressed to lethal levels.

RTÉ displayed a map of Ireland to illustrate the point – but the map was missing the six counties of Northern Ireland.

Sinn Féin deputy leader Mary Lou McDonald was among the more restrained commentators on Facebook when she wondered what RTÉ was doing showing such a map.

“What is this? What is this all about? Who in RTÉ took it upon themselves to mutilate the map of Ireland. And why?” she asked.

Who in the #LateLateShow thought this was a good idea? pic.twitter.com/g39mSV63T5

In response some comments were witty; One wit said “tell them I didn’t know Cavan had a coast” a reference to the gray shading which represented the space of the State’s coast as well as the space where Northern Ireland should be.

Other commentators were more outraged describing the deletion of the North as “disgraceful”.

Another commentator took Ms McDonald to task in the words: “In case any of ye are interested in what was going on there, it was a survey of effects on general health an’ life expectancy depending on where you live in the Republic of Ireland referencing, healthcare, education, deprived areas, etc, since the six counties aren’t funded by the Irish Government that’s probably why they weren’t included. But fair play ta Mary Lou, she put up a pic with no real statement about it and still got ye all going . . . again.”

A number of commentators said the image came from a recent census study and was not RTÉ’s original material, but many people who commented on social media were clearly irked.

On Twitter, Alistair Martin asked “Who in the #LateLateShow thought this was a good idea?”

Some of the comments called for a boycott of RTÉ while others were less kind.