Cold Feet returns, Pat Kenny's back on the case, and we learn what Irish people earn on both ends of the scale 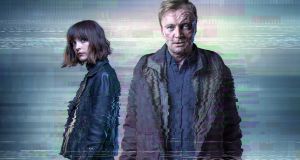 Richard Dormer stars as a disfigured, obsessive cop on the hunt for a serial killer in Rellik

What Are You Working For?
Monday, RTE One, 9.35pm
It’s a question we’ve all asked ourselves at the end of another gruelling week at the office/sweatshop/coalmine, but now Philip Boucher-Hayes sets out to find the answer in What Are You Working For?. In a follow-up series to What Are You Eating?, Boucher-Hayes delves into the world of work in Ireland, from the boardroom to the factory floor, to see what motivates the workforce - and what makes them to want to tell their boss to stick their job. He sticks his nose into people’s pay-packets to see what they’re taking home, and meets workers in both the public and private sectors, and in the pillar industries of finance, pharma and tech.

Who loves their job, and who finds their job endless drudgery? Which are the most sought-after careers, which ones give the most job satisfaction, and how important is your job to your sense of self-worth? This one-hour documentary also looks at workplace issues such as the gender pay gap and the gig economy, but will it dare to ask: why is are super-rich CEOs earning up to 100 times the wages of their staff?

Ireland’s Rich List
Thursday, RTE Two, 9.30pm
Joe O’Shea peeks into the Sunday Times Rich List to find out who are the wealthiest people in the State in Ireland’s Rich List. This two-part series counts down the top 30 homegrown moneybags, and the list will include Bono, JP McManus, Michael O’Leary and Conor McGregor. With help from a team of financial commentators, O’Shea will look at how they made their money, what they do with it, and what it takes to get on this most coveted of all lists.

Frock Finders
Tuesday, RTE One, 8.30pm
It doesn’t matter whether you’re rich or poor or squeezed somewhere in the middle - you’re going to need the perfect dress for that special occasion, and it’s going to be harder to find than the holy grail. Frock Finders is a six-part series showcasing some of Ireland’s top boutiques, and following women from all walks of life as they scour the land in search of something to wear to the ball. In the first episode, comedian Katherine Lynch hunts down a glamorous guna for a photoshoot on the Cote d’Azur, designers Charlotte and Jane kit out a top barrister, and Kara Maher from Frock ‘n Fabulous gives her Dublin boutique a makeover.

Mammon
RTE Two, Friday, 9.35pm
Norwegian political/financial/media thriller series Mammon returns for a second series, and once again investigative journalist Peter Veras (Jon Oigarden) is following a paper trail that leads far into the corridors of power - and deeper into danger. A top newspaper journalist is murdered in a carpark by a masked gunman - could it be a terrorist attack on the media, or is someone in power trying to silence certain journalists? The murder reverberates through the Norwegian government, and ratchets up an ongoing conflict between the prime minister and the minister for finance. If only Leinster House was this exciting. If you missed series one, it’s available as a boxset on the RTE Player right up to Friday’s series two opening double-bill.

Rellik
Monday, BBC One, 9pm
Richard Dormer stars as a disfigured, obsessive cop on the hunt for a serial killer in Rellik. The serial killer thing has been done to death, but this new series is the work of Harry and Jack Williams, the crimewriting brothers behind the excellent The Missing, so no surprise they’re bringing a new twist to the tale. The clue is in the title: Rellik (killer backwards) tells the story in reverse, revealing the identity of the perpetrator at the beginning, then working back in time to the crime itself. Dormer plays charismatic detective Gabriel Markham, with Jodi Balfour as his partner Elaine Shepard. As their team close in on their murderous prey, Gabriel and his team are sure they’ve identified the killer, but are they looking for the wrong person?

Cold Feet
Monday, TV3, 10pm
It was one of telly’s most popular turn-of-the-millennium comedy-dramas, and when it made a comeback last year after 13 years off our screens, viewers came back in their droves to catch up on the lives of their favourite characters. Now Cold Feet returns for a seventh series, and we find Adam (James Nesbitt) getting settled into his new job in a trendy dotcom firm, and settled into his relationship with landlady Tina (Leanne Best). But will his dotcom bubble burst, and will Tina’s commitment-o-phobia scupper Adam’s grand plans? We’re ready to jump right back in.

The Pat Kenny Show
Wednesday, TV3, 10pm
Vincent Browne might be retiring, but Pat Kenny's back to grill the politicians in his new current affairs show, asking the big questions affecting the nation, from health, housing and high finance.