Queer Eye: healing fragile masculinity one hug at a time 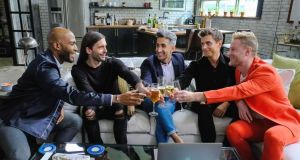 Makeover shows used to be the mainstay of the self-righteous. If it wasn’t some sour-faced pseudo-nutritionist yelling at poor Paula in her kitchenette full of Pot Noodles it was the sartorial succubi scouring through wardrobes, lassoing women into clothing conformity. It was bullying rebranded as “self-improvement”.

In among these obtrusive shows came surprise smash-hit Queer Eye for the Straight Guy, which worked off the premise that clueless straight men required assistance from gay guys to help reinvigorate areas of their lives – you know, grooming, cooking, culture, fashion.

It was frothy and funny but also radical in its own way to see gay men on mainstream television not as characters but as themselves, not as comedic foils but people who were respected and valued in their careers. The “Fab Five” presenters broke through in a society on the cusp of adopting the gels and moisturisers of metrosexuality but still sniggering at David Beckham in a sarong.

In the age of RuPaul’s Drag Race, Transparent, Modern Family and soaps embracing a range of gay characters, televisual representation and visibility is at such a level of buoyancy it would be easy to scoff at the return of something that seems as outmoded and redundant as Queer Eye for the Straight Guy.

However, this Netflix “glow-up” feels more relevant than ever. “The original show was fighting for tolerance, our show is fighting for acceptance,” fashion-guru Tan France intones over footage of the newly assembled Fab Five in the first episode.

Transplanted to Atlanta from its original cosmopolitan New York home, the show (now rechristened the more inclusive Queer Eye) deals with the usual style upgrades but also tackles issues surrounding identity and the fragile nature of masculinity in a modern world where impotent anger rages.

The Fab Five 2.0 are not there to ridicule the men or make examples of them; they’re not there to judge their choice of decor or insult their tastes – the bitchier elements of the original series have been snipped off in the intervening years.

The subjects are never depicted as helpless buffoons, nor are they treated as uncouth idiots; the problems that are raised are those of an unwillingness to be vulnerable or the social embarrassment surrounding the notion of self-care.

The running theme is the conflict between performance masculinity and desire for companionship or pride in appearance – which the men automatically dismiss as “feminine” concerns. Neglect is worn as a badge of pride. Tequila-guzzling Tom (57) constantly refers to himself as “ugly” while tech-bro Neal, hiding behind a face-engulfing beard, rarely leaves his house.

There is real pleasure to be found seeing these unhappy men delight in vivacious grooming expert Jonathan Van Ness telling them they are attractive, they are worthy of attention, as they glance coyly at themselves in the mirror, admiring their subtle transformations, a shy smile spreading across each face.

The most touching episode features AJ, a young man who fears coming out to his stepmother and feels restricted by his idea of what it is to be gay – viewing it as a loss of masculinity. Through the five chatting about their own coming-out struggles and their assurance that his sense of self will improve, it’s a moving story that is dealt with sensitively and with bruising honesty.

Although not everything in life can be solved with the right skincare routine and a tasty guacamole recipe, the big-hearted Fab Five with their infectious joy and gently challenging conversations are transforming the shallow makeover format one group hug at a time.