Have 'The Simpsons' creators got a crystal ball? You could be forgiven for thinking so 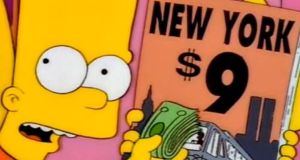 Al Jean: ‘There’s a brochure that says New York at $9 a day, and behind the nine are the twin towers. It looks like a 9/11. That one is strange’

There is no crystal ball in The Simpsons writers’ room, but you could be forgiven for thinking so.

Over its almost 30-year run, the series has alluded to many real-life events long before they’ve happened: The Trump presidency, the discovery of the Higgs boson particle, 9/11 and, most recently, Disney’s takeover of Fox. By some accounts, the coincidences – predictions, if you will – number in the 20s, possibly more.

This track record has led fans thinking The Simpsons, at the very least, is a product of television’s most intelligent writers, and, at the most, prophetic.

So is there something bigger going on?

The future can be forecast better than one might think says Al Jean, one of the show’s original writers and its showrunner since 1998. Episodes air a year after they’re produced so it’s a “frame of mind that we’ve got, that we think one year ahead ... I predict people will make too much of our great predictions,” he says.

The show is the product of brilliant minds, many Harvard educated, says William Irwin, chairman of philosophy at King’s College in Wilkes-Barre, Pennsylvania. His book The Simpsons and Philosophy has been taught for years at the University of California, Berkeley and other places.

Writers rule on The Simpsons, not the actors, he says. The result is a show packed with references to art, literature, pop culture, politics and science.

“When that many smart people produce a television show, it’s bound to make some startling ‘predictions’,” he says.

Another possible factor at play: “The law of truly large numbers,” a concept presented by Harvard mathematicians Frederick Mosteller and Persi Diaconis in their 1989 paper Methods for Studying Coincidences.

“With a large enough sample, any outrageous thing is apt to happen,” the law states. The Simpsons is the longest-running scripted TV series in history.

For fans looking for answers outside conventional logic, Dr Bernard Beitman, author of Connecting With Coincidence, offers the existence of the “psychosphere,” our mental atmosphere that is essentially “group mind in action.”

“Under the right conditions, we can know things that we don’t know we know, and we can sometimes predict events,” says Beitman, a former chairman of the psychiatry department at the University of Missouri.

Below are some coincidences from The Simpsons, and how they can (or can’t) be explained.

In The City of New York vs Homer Simpson, a moment alludes to the 9/11 attacks on the World Trade Centre in New York City, and not even Jean could explain it.

“There is a frame where there’s a brochure that says New York at $9 a day, and behind the nine are the twin towers ... it looks like ‘9/11’. That one is a completely bizarre, strange thing,” he says.

In 2010, Bill Oakley, an executive producer on the show at the time, told The New York Observer: “$9 was picked as a comically cheap fare,” he says. “And I will grant that it’s eerie, given that it’s on the only episode of any series ever that had an entire act of World Trade Centre jokes.”

The most recent prediction to come true was Disney’s $52 billion deal for 21st Century Fox, announced in December. In When You Dish Upon a Star, there’s a sign that reads “20th Century Fox, a division of Walt Disney Co”.

Jean says this was in line with the writers’ forward-thinking process. The deal “was just another one,” he says. “It happens. There’s always mergers. It seemed logical, you know?”

At first glance, this might seem like the freakiest Simpsons prophecy: Homer, striving to be the next great inventor, standing at a chalkboard on which a complex equation is scrawled.

The equation is a just a hair off what would become the Higgs boson particle, or “God particle,” which was discovered in 2012, decades after it was first presumed to exist.

But it can be explained to some degree: “The Higgs boson was written into the script by David Cohen, who’s one of the people with a math background on this show,” Jean says. “What he put in was a plausible guess at that time. So it wasn’t like totally out of left field.”

While this prediction might seem amazing, it’s actually one of the show’s most logical prognoses, Jean says: “There’s a category I would call ‘plausible predictions’, which Trump would fall under.

“People have somewhat forgotten, but he was talking about running for president then,” he says.

In a 2016 interview with The Hollywood Reporter, writer Dan Greaney says the joke was intended as a warning: “That just seemed like the logical last stop before hitting bottom. It was pitched because it was consistent with the vision of America going insane.”

The show predicted the NFL champions three years in a row (in an episode that was all about predictions). And yes, all three were just lucky guesses, Jean says.

In Lisa the Greek (1992) Homer and Lisa bond over sports gambling. Lisa has discovered a knack for predicting football winners, which Homer happily cashes in on. Lisa tells Homer that if the Washington Redskins defeat the Buffalo Bills in the Super Bowl, she would still love him. If they don’t, she won’t.

Washington wins, and all is well between them. Three days after the episode aired, Washington beat Buffalo 37-24.

1994 was the last time The Simpsons altered the episode, and the last time Buffalo made a Super Bowl appearance. – New York Times