Brexit-barmy Brits know a class Act when they see it 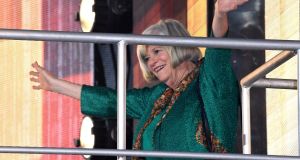 In this snowflake-crushing landscape where Katie Hopkins is still a thing and the average radio show is made up of hours of huffing over ‘PC gone mad!’, it would have been easy to imagine the Brexit-barmy Brits stumping for Ann Widdecombe as their ‘commonsense’ queen.

A symbol of so-called sanity, there to put an end to any frank discussion with a sigh and a roll of her eyes.

Ann attempted to rule the house with an iron fist like a reality-telly version of her sweetheart Mrs Thatcher, although instead of refusing to negotiate with terrorists her stance was a refusal to take part in any tasks where Wayne Sleep’s unshod ankle could be viewed.

The lady was not for turning, stubborn and unenlightened in the ways of the modern world, she constantly belittled the younger, meeker housemates such as Jess Impiazzi – constricting her and others’ exuberance with her domineering presence – and generally acted like she was possessed by a Victorian school marm such was the level of her mortification if anyone so much as belched in front of her.

The ghost of Mary Whitehouse seemed to infect the house with everyone tiptoeing around Widdecombe minding their Ps & Qs and reaching for their polonecks.

Age was used as an excuse, an impenetrable force field with housemates viewing Ann as though she was a vulnerable OAP ready to be shipped off to the nearest nursing home forgetting that the spritely, engaging Amanda Barrie was 10 years older than her.

Even Barrie mollycoddled the matron, fetching Widdecombe a nightly ration of biscuits as though fearing her gremlin transformation would complete if she was not pampered and fed before the witching hour.

If they weren’t cooing at her like she was some medical miracle for being able to stand upright, there was the about-turn of unabashed fame-hungry socialite Ashley James (who had previous altercations with the politician), who suddenly began to state that Ann should be “respected” and let her cantankerous witterings go unquestioned, flinging her arms around her at bedtime, cloyingly referring to her as “grandma” in the shallow hope that this would curry favour with the viewers who repeatedly saved Widdecombe from eviction.

Thankfully, there was the unstoppable force that was Shane Jenek, who obviously never managed to permeate the immovable object of the Wall of Widdecombe.

He did, however, circumvent her and instead bore his way into the hearts of the public.

Forceful and outspoken but with a patient and calming nature, he never succumbed to Ann’s shame-game, even when older LGBTQ contestants such as Amanda Barrie and Wayne Sleep disappointingly refused to support his criticisms of Ann’s robust, outmoded views or even acknowledge her political history of endorsing the controversial Section 28 clause.

The more isolated and fragile he became in the final week with cowardly housemates kowtowing to Ann’s authority, the more public support swelled until it was just the two of them, Widdecombe perching awkwardly alongside Courtney in all her glitzy, Rainbow Brite glory, a snapshot of society’s social and political extremes.

Shane J/Courtney Act sailed to victory and proved to be the class act that Widdecombe could not defeat.

Ironically in the end, in Celebrity Big Brother’s Year of the Woman, Ann’s wish for the “tokenism” of the show to be dismantled came true but just not in the way she ever could have expected.