From Yeats and Maud Gonne to Daniel and Majella, romantic Ireland isn't dead and gone 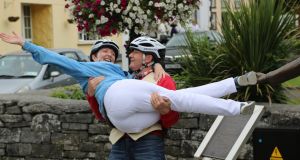 It’s Valentine’s Day next week. It’s hard to do romance when the consequence of love in this country has historically been shame, imprisonment or exile. So I’ve dredged our culture for romantic things. Here are all of them.

Biddy and Miley
It’s a tale as old as time: the union between a woman, a man and a parcel of good tillage land. It was all grand in the 1980s, when the fictional town of Glenroe had one tweedy Protestant, one reticent priest, one single woman who knew her place and a load of plots about agricultural diversification. But then along comes that wagon Fidelma luring Miley into extra-marital hijinks and before you know it the country is awash with pornography, fidget spinners and hummus.

Daniel and Majella’s B&B/S&M Road Trip
Every year the sexiest man in Ireland and his voluble consort roam the country crockery-teasing Ireland’s most excitable mammies and their good delph with a sensible car and a twinkle in his eye. It’s pure filth to be honest.

Diarmuid agus Gráinne
Gráinne, who is being married off to old man Fionn mac Cuamhail against her wishes, drugs the entire wedding party, puts a sort of spell on his pal Diarmuid in order to seduce him, and then legs it around Ireland and Scotland with Fionn in angry pursuit. It’s a complicated love story, but the moral is, if you think about it: we really need to teach consent classes in schools.

Fianna Fáil and Fine Gael
Most of the last 100 years could be looked at as a nation-building rom-com during which stiff, uptight Fine Gael has been consistently infuriated yet aroused by the shenanigans of ditzy, manic-pixie-dream party Fianna Fáil. The truth is, we all know that they’re just one confidence-and-supply arrangement away from kissing passionately to the sound of a Love Lift Us Up Where We Belong. And then they will turn together to face the real enemy: the Irish people. Sorry, I mean “the Brits”.

WB Yeats and Maud Gonne
Nowadays, WB Yeats would probably spend a lot of his time poetsplaining and not-all-men-ing his way around social media. In the old days, however, he was part of one of the saddest love triangles Ireland has ever seen. Yes, the mystical word-nerd was an archetypical “nice guy” rejected by rebellious mean girl Maud Gonne in favour of leather-jacket wearing bad boy John “Pacey” McBride.

“Edwardian bitches be cray-cray,” WB wrote over and over again, in different words and different ways. “Pleeeaaaaase . . .” is the explanatory subtitle you’d put on a lot of his excellent but whiney poems about Maud, or “Whyyyyy won’t you go out with meeee?” Over the years, he got over Maud and became obsessed instead with magic and polyamory and . . . Maud’s daughter. Classic WB Yeats: poet, myth-maker, tea-towel model, creepy weirdo.

“I would if I could,” he said quietly, a tear coming to his emerald green eye.

He really does love Ireland. So, to understand “love” you should observe him and learn. See the way he drapes a tricolour around himself in order to argue with the butcher. See the flash of anger in his eyes as he recalls British atrocities, like the time that magazine claimed Saoirse Ronan was British. Note the way he blesses himself when he says the words “Saoirse Ronan”.

And watch him now, standing up to slur the national anthem just because you accidentally changed the station to BBC Northern Ireland and it made him think of Liam Neeson. Yeah, that’s love. But wait – isn’t he just singing a slowed-down version of Hold Me Now with some Irish words thrown in? Does he actually know the national anthem at all?

Hey! Stop ruining this. You’re witnessing love, my friend. That man is in love.

Leap Year
In this rom-com, Amy Adams plays a city girl with notions who comes to a prurient, cattle-logged land filled with sex-mad drunks in search of superstitious love. Anyway, the backward alcoholism does the trick and she seduces a surly Norwegian (I’m just going by the accent). I think the film-makers really got Irish culture and I finally felt seen.

Leprechaun II
This is a sequel to Leap Year starring Warwick Davis in the role formerly played by Amy Adams. In this film, our heroine, now with magic powers, terrorises a teen who has come into possession of a pot of gold. Furthermore, the leprechaun seeks a bride. This is the most romantic film I have ever watched. Taken together, these films tell the story of the Irish Development Authority and its bid to lure multinationals to Ireland.

Skellig Michael now that it’s famous
Phoar! Look at Skellig Michael up there on the cinema screen, thrusting out of the ocean, all wet and covered in puffins. It reminds us all, somehow, of our first husband, Derek.

The Hucklebuck by Brendan Boyer aka ‘sex education’
The approach to sex education in 20th-century Ireland was idiosyncratic and limited. At one point, the whole curriculum was transcribed word-for-word and put to music by Brendan Bowyer. “Do the Hucklebuck, hey!” he sang. “Do the Hucklebuck, hey! If you don’t know how to do it then you’re out of luck . . . You wiggle like a snake, waddle like a duck, that’s what you do when you do. The. Huckle. Buuuuuuuck!”. And the rest of us, gathered around the radio, scribbling notes furiously. That was an interesting weekend, I can tell you.

The Ballroom of Romance by William Trevor
Every week on First Dates, bubbly well-dressed citizens of the 21st century meet to chat about life and love with hope in their eyes. In The Ballroom of Romance, in contrast, our heroine settles for a grope in a field with an alcoholic bachelor while considering her future as a lonely spinster caring for an ungrateful, ailing father. Happy Valentine’s Day!

Love me for a Reason by Boyzone
“Love me for a reason,” sang Boyzone, who came in five varieties, “and let the reason be love.”

“That’s a tautology, Boyzone,” I warned. “No-one is going to fall for your shoddy logic and your off-the-shoulder dungarees.”

How wrong I was. The youth of Ireland fell in love with Boyzone. And now God is dead and everything is stupid.

Hell yeah! How the satanists became the good guys

Love poems: ‘For one night only naked in your arms’ – 14 poets pick their favourites