Other Voices: line-ups revealed for new season of TV shows 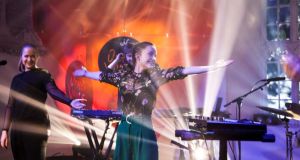 Sigrid, winner of BBC’s Sound of 2018, performing at Other Voices. Photograph: Rich Gilligan

Other Voices, Ireland’s longest running music TV series, is back on our screens next Thursday (11.15pm, RTÉ 2) with a number of acts that promise to impress. The 16th series will include performances from St James’ Church in Dingle, as well as from Belfast, Electric Picnic and Berlin.

Lankum, Perfume Genius, Django Django, Aine Cahill, Soulé and Jafaris are among the acts due to appear on the series, which will run for 10 weeks. You can read the full episode guide below.

Wyvern Lingo will perform I Love You Sadie and others songs from their debut album.

Picture This will also perform on the first episode, as well as Maria Kelly, winner of the IMRO Open Call 2017.

The artists will be chatting about their lives and work to presenters Annie Mac, Huw Stephens and May Kay.

In December 2017, more than 8,000 people travelled to Dingle, Co Kerry for the eir Other Voices Festival, a three-day celebration of Irish and international music. Last summer, Other Voices held an inaugural event in Berlin with performances from Talos, Soulé and New Jackson.

Blood: A disappointing journey into the Irish psychosphere
4