Review: The hit Irish film is now a TV series, and its comedy has grown in confidence

A clip from episode one of the Young Offenders series. Contain offensive language. Video: BBC Three 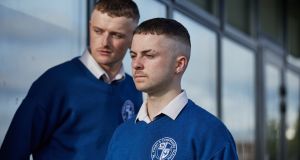 If you’ve already met Conor and Jock, the delinquent stars of Peter Foott’s glorious coming-of-age caper The Young Offenders, you shouldn’t be surprised to see them back again so soon. The two Cork teenagers were never going to stay out of trouble for long.

If you haven’t had the pleasure, though, Foott’s television version (RTÉ2, Thurday, 9.30pm) is ready to make our introductions again. High up on a roof top, in their matching severe haircuts and wispy adolescent moustaches, Chris Walley’s outgoing and widely-vilified schemer, Jock, and Alex Murphy’s impressionable, permanently confused accomplice, Conor, are stealing lead, ready to sell it, perchance to buy sex dolls.

It says something about how exquisitely well cast Walley and Murphy are in the parts, and how routinely but affectionately Foott will puncture their plans, that they never seem less than adorable.

Jock’s giddy sex doll fantasy is deflated when he assigns it an exotic name (“That’s a guy’s name; Rueben” clarifies Conor). And the scheme is derailed by Sergeant Healy (“A shit Irish Terminator”), forever in hot pursuit as they cycle breathlessly through a lovingly shot Cork city.

Stealing lead or bicycles may count as a get-rich-slow scheme: whereas the film followed a grand adventure to salvage a €7m bale of cocaine, the television series brings their dreams and their payoffs back down to size.

It also curbs some of the earlier incarnation’s more cartoonish excesses, retaining the film’s outlandish baddie PJ Gallagher to play an exasperated school principal instead. If anything, those adjustments make the comedy more confident. When no one gives you a chance, growing up is challenging enough.

For all its buzzy and brisk editing, which can give the action the manic slam of a comic strip and the strut of a hip-hop video, the delight of the show is in its small moments, its comically tangled and effortlessly touching vision of friendship.

Conor struggles to understand it, and then to make it understood. “No ma, I’m not gay,” he attempts, in conversation with Hilary Rose’s marvellously flawed young mother. “But if I were, he’d be the guy I’d like to be gay with.”

Between Derry Girls and The End of the F***ing World, there are plenty of ways to see life through teenage eyes, as unfair and as funny as it is.

They may act tough, but The Young Offenders might be the most innocent of them all.