Here’s seven of the best Oirish films including a soulful hunky IRA man, and a corned beef and cabbage plot 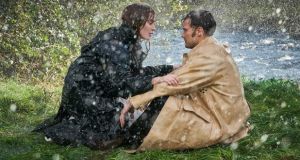 “Welcome to Ireland!” says Christopher Walken, at the outset of the trailer for Wild Mountain Thyme, already my favourite “bad” Irish film. Then he reveals that he is annoyed because his virginal-yet-hunky son is a dreamer which is a classic Irish parent segue, really.

You see, Christopher Walken’s son, Jamie Dornan, looks up at the stars rather than being bent double looking at Ireland’s favourite thing, the ground. “There’s these green fields and there’s us, whatever that is,” he says dreamily to his true love, Emily Blunt, who is on a horse, the mad thing.

“It’s two people and some green fields, you literally just said what it is,” is what I would reply if I was Emily Blunt, and someday, God willing, I shall be.

There are, arguably, some accent issues here. Christopher Walken has decided to improve the Irish accent with some mid-Atlantic additions, but in my opinion it just makes him sound like a man from Athlone who’s lived in south Dublin for a while. Irishman Jamie Dornan, in a desperate bid to have his passport confiscated, has chosen to model his accent on his hero the Leprechaun from the film Leprechaun. Meanwhile, Emily Blunt is trying to unify this strife-ridden island by pronouncing each word with a different regional accent. Over the latter part of the trailer she also sings Wild Mountain Thyme, which is, of course, a Scottish song. (“Close enough!” said the musical director before going home early.)

A woman in a long dress and shawl dances around an archaic looking farmyard for unclear reasons but probably because she’s been driven mad by the patriarchy.

The most desirable man around is a incoherent teddy boy in a sort of onesie.

It’s difficult to tell what era it is. People are largely agrarian but there are some hints of a developed industrial society elsewhere.

A man falls out of an ancient coracle. A man proposes to a donkey. A toothless simpleton guffaws from atop a stone wall after spying some donkey wooing. “Sure that’s just a good Saturday night?” says you.

People are fierce impressed by a motorcar.

A woman is brought over to America and shown big buildings but her whimsical fiddly-dee brain can’t cope with it and she finds her thoughts flying back instead to the incoherent teddy boy in the onesie.

Everyone keeps falling over because of hereditary inner-ear problems.

Even if all this wasn’t incredibly incisive about life in Mullingar, I don’t think I could get behind the griping. There’s no reason an American production team making a film about “Ireland” should know anything about Ireland sans quotation marks. You could fit our entire population in the margin between Trump and Biden’s presidential vote. Let’s just hope they keep us in their hearts along with other fictional places they hold dear, like Endor and Hobbiton and America in the 50s. Mock them for getting our accents wrong? We should just be happy they haven’t tried to liberate us yet.

Other American depictions of Irishness I enjoy:

Far and Away
In this film Tom Cruise plays a rebellious Irish peasant who has been pushed from his land by the perfidious English and so rushes off to America to make his fortune with Nicole Kidman, a ginger-haired child of the ascendency who’s named after a river (The Dodder, I think). For some people, this film is beyond the pale because of the unusual accents. Yes, the decision to overdub all of the actors with Chewbacca’s voice is unusual given that Chewbacca’s accent is very specific to Cavan but it doesn’t bother me too much. For me, the most remarkable thing about Far and Away, looking at it now, is that it’s set in the 1980s.

Leprechaun
“The luck of the Irish is being packed and shipped to a little town in south Dakota, whose luck may have just run out,” is the tagline. The plot? A tiny chortling Irishman with buckles on his shoes goes over to America in a crate like his forefathers before him. He just wants to have fun. “Come and play with me, friends!” he says, which is ironic because one of the Americans he directs this to is Jennifer Aniston from Friends. Unfortunately, she and her pals run away shrieking because Americans are no craic. High-jinks ensue but also industrial accidents. Leprechaun has far more to say about the Irish migrant experience than Brooklyn in my opinion. Americans Are No Craic was the working title.

Darby O’ Gill and the Little People
“What kind of man are you at all that doesn’t believe in the little people?” says Sean Connery in his Irish/Scottish/American accent at one point and who amongst us has not hung their head in shame as their father asked us this very question? It strikes to the heart of Irish life. The main character, Darby O’Gill, is about to lose his job as the apolitical caretaker for a lord, but a quiet word with a local organisation that grant wishes ultimately sorts everything out. In many ways, Disney’s documentary about Fianna Fáil is a delight, although I can see how its depiction of drunken jigging peasantry might be offensive to some (self-hating Dubliners, usually).

Leap Year
American Amy Adams goes to surprise her boyfriend in Dublin where, in 2010, a woman could propose to a man on a Leap Year but couldn’t marry another woman or have an abortion. They don’t mention those things in Leap Year. Amy Adams ends up getting diverted to Dingle where a surly Irishman (Englishman Matthew Goode) drives her to the big city during which the rain, cows and social conservatism warm her metropolitan heart. I . . . like it . . . It’s loosely based on the excellent Powell and Pressburger film, I Know Where I’m Going! which is set in Scotland. Same thing, says you, an American.

A Prayer for the Dying
In A Prayer for the Dying, soulful hunky IRA man Mickey Rourke is on the run because of an accent he didn’t commit properly to and, also, some murders he did. What he has landed on accent wise is somewhere between Cantonese and Scottish, with touches of pigeon. He is beset on all sides because of the accent and seeks sanctuary with a priest played by Bob Hoskins. “You’ve a choice, turn your back on the horror,” says Bob Hoskins of the accent. But Mickey Rourke cannot.

Teen Titans Go
My favourite American depiction of the Irish diaspora is in an episode of the Teen Titans Go cartoon in which the characters have been cursed by a leprechaun and so must lure wild leprechauns with corned beef and cabbage in order to create a rainbow on which to travel and steal some medicinal leprechaun gold. I think I remember this from Mass. I love Teen Titans Go.

The Devil’s Own
Originally a spin-off of popular publication Ireland’s Own, this spun wildly away from the original brief. You see, Brad Pitt realised that Mickey Rourke hadn’t completely murdered the Northern Irish accent and wanted to finish the job. And so we get another redemptive tale about a hunky IRA killer. By 1997 this was a whole genre. At this point the people of Ulster just gave up and the accent they have today is based on Pitt’s version.