Deliveroo: Secrets Of Your Takeaway – I want my money back

Review: The title suggests lifting the lid on the company that has stormed the food industry 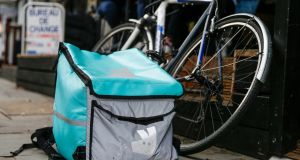 Secrets Of Your Takeaway doesn’t have a great deal to say about the working conditions of Deliveroo riders. File photograph: Hollie Adams/Bloomberg

If Deliveroo: Secrets Of Your Takeaway (Channel 4, 10pm) was couriered to your front door by a breathless person on a bike you might consider requesting a refund. The title suggests a lifting of the lid on the delivery service that has taken the restaurant industry by storm but in the process arguably helped entrench the gig economy.

There are also, of course, questions to be asked about Deliveroo in regards to the cult of disruption that rules Silicon Valley. Is it a good thing that Deliveroo could potentially do to restaurants what Airbnb has to the property market or Amazon to bookstores?

In an Irish context it’s furthermore hard not to think of Thiago Cortes, the Brazilian Deliveroo rider killed in a hit-and-run in Dublin in September.

Yet none of that comes up in a documentary that just about falls short of puff-piece. We are instead invited to pull up a seat and hold tight as Deliveroo grapples with coronavirus. The pandemic is obviously an opportunity for a company that has helped mainstream food delivery, first in the UK, then Ireland and much of western Europe.

But executives from Deliveroo, founded in London by American ex-pat Will Shu in 2013, confess, too, that Covid-19 has posed an existential threat, with a wave of lockdowns putting many of its restaurant partners out of business.

“We had this very high sense of risk. We felt we were getting close to a cliff edge,” says one. “There was a level of panic, definitely.”

Secrets Of Your Takeaway doesn’t have a great deal to say about the working conditions of Deliveroo riders. Manchester student Wazir is ambivalent about the gig economy. However, he favourably compares Deliveroo to UberEats (which doesn’t tell riders how far away an order is until they agree to deliver it).

“There is a lot of criticism about the gig economy,” he says. “At the heart of it … it works for a lot of people. Otherwise there wouldn’t be an industry.”

Services such as Deliveroo have enormous leverage over restaurants because they control where these “partners” rank on its webpage and app. This becomes painfully obvious to Verity Foss and Charlie Watson from trendy takeaway Oowee, whose new vegan outlet in East London nearly comes unstuck  as the economy shuts down March.

“In Dalston the competition is so strong,” explains Charlie. “You’re really depending on Deliveroo.”

There is a chink of light in so far as everyone acknowledges home delivery will never replace the dining experience. The head chef from London casual dining chain Caravan goes so far as to unplug Deliveroo when the first UK lockdown lifts in July. The focus, he says, must be on serving customers face to face. “It [gets] kind of lost,” says a member of staff. “Putting in a bag and handing it to a rider.”