Striking Out: starring Amy Huberman and a wholly unfamiliar Dublin

Season two of RTE One's legal drama 'Striking Out' has just started. It stars Amy Huberman in the role of Dublin-based solicitor Tara Rafferty and will run over six episodes. 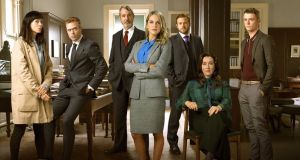 Despite the brooding tone of Striking Out, its real identity is utterly weightless

Striking Out (RTÉ One, Sunday, 9.30pm), the lacquered law drama now in its second series, is set in Dublin in a parallel universe.

Much of it is recognisable, like the reflective sheen of glass and steel in the Docklands, touchingly reminiscent of the historical boom, or, in this episode, the crowded interior of a Direct Provision centre, where Ireland’s asylum seekers  exist in a limbo of status.

But much of it is wholly strange, like the-slow motion Hollywood downpour that accompanies a re-introduction to its characters, so style-conscious that Striking Out often resembles an advertisement for itself. Or its belief that a quick flight of emotive oratory can waive a three-month waiting period for a marriage, or override immigration policy.

When the show straddles a line between realism and fantasy, your attention can snag on otherwise minor plot points. Would the Law Society really “sell off” a deceased solicitor’s outstanding cases to the highest bidder? That’s a genuine question.

In lieu of a “previously on” recap of its first season, Amy Huberman’s roundly betrayed solicitor Tara lays her current predicament bare in the opening seconds. “Meg is working for your father now,” she tells her ex on the phone. “Ray is in jail, Pete and I are evicted.”

To unpack that a little: her breathy investigator and confidante has betrayed her; her charming young associate has been framed; and her dishy landlord has been swindled. Tara, a minnow in a lake of pikes, is really up against it.

The facial expression that Huberman employs to break-up with dishy Pete – half sorrow, half apology – is really the only one the show requires of her, never allowing Tara a moment without worry. That informs the tone of the show, just as Huberman’s eyes, I suspect, inform its entire colour palette: a soothing light blue, reflected through the sets and costumes, that makes her gentle sadness seem all pervasive.

If Tara has problems, the helpless situation between asylum-seeker Promise (Stephanie Levi-John), due for imminent deportation, and love-struck farmer Daniel (An Klondike’s Owen McDonnell) ought to throw them into sharp relief. Tara, in her retro shades and pencil skirt, is an incongruous vision on the sheep farm, part Tippi Hedren, part Cupid, smoothing out misunderstandings while uncovering a story of human trafficking. However, no obstacle is too big for some smooth-talk and a dollop of nepotism.

“We wish to marry so that whatever seas and continents divide us, we will still be a couple in the eyes of the law,” Promise says to the county registrar, whose hard heart thaws in the instant.

Seeking a stay of deportation, Tara approaches the Minister of Justice (at a rooftop book launch in Temple Bar, no less), whose hard heart thaws at the mention of Tara’s important family connection. When Promise, still in her wedding dress, is brusquely shunted to Dublin Airport by the guards, but reprieved in Terminal 2 by Tara bearing a Minister’s letter, you’d need a heart of stone not to laugh.

But despite the studied, brooding tone of Striking Out, its real identity is as something utterly weightless. That these positions cannot be easily reconciled results in a show without rhythm, saddled with a pace that lumbers and lurches.

The real show lies in Tara’s exclamation, “Oh my god, I think my love birds are on the run!”, her beat of delight in a Grapefruit-and-Champagne scented candle, or the emerging sass of Kate Gilmore’s secretary Lucy.

The world it depicts is full of deception and double dealing, but at such gossamer moments Striking Out seems most true to itself.