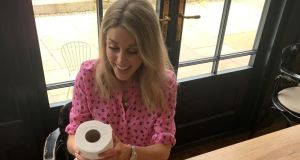 Amy Huberman: ‘I was happy with toilet roll and hand sanitiser (as a birthday present) for now’

The writer and actor Amy Huberman had just finished filming the second season of her RTÉ comedy Finding Joy when the coronavirus pandemic hit Ireland. The day the lockdown was announced it was her birthday, for which she received a present of some toilet roll and hand sanitiser, which you would know if you followed her on Instagram.

“It all kind of reminds me of living on my own in London, but I didn’t have small humans running around then,” she says of her new shut-in status. “Every 20 minutes they want to be fed… I count it down mentally in my head to ‘I’m hungry’. That’s our life at the moment.”

How is Brian (O’Driscoll, retired rugby player spouse)? “He’s quite calm. He’s chilled… So much of his stuff has just stopped. There’s no sport. We’re having to find things for him to paint. He’s already painted the shed and weeded the garden.”

Everyone is different, she says. “Brian prefers to know the scale of something. But for the most part I just want to know what I need to know and to get through the day… There’s no way to get away from worries with family. The worry and anxiety comes in waves and there are good days and bad days.

It’s great if people are creative, but if we just manage the stress and anxiety and get to the other side, that’s good as well

She’s doing the best to home school the children but she doesn’t want to overplay this. “When I say I’m ‘teaching’ the kids, I’d hate to put other people under pressure. For me it works because that routine for them works for them, but I’d wonder about my value as a teacher.”

She’s keeping in touch with people using Whatsapp and Zoom. “That takes up a lot of the evening,” she says. “My screen time at the moment is appalling. You know when your report comes in? It’s up quite substantially. The Whatsapp groups are busy at the moment.”

Until the lockdown she was visiting her mother by “standing on her road and saying hi.” Her father, who suffers from Parkinson’s disease, lives in a nursing home a five-minute walk away, and they’re still able to go up and wave to him in the window. “It’s very scary for older people,” she says.

She feels relatively lucky that Finding Joy finished filming before the pandemic hit, because she knows a lot of people in television and film whose projects are in limbo. She was on a natural hiatus when the isolation began. If it goes on for longer, she thinks she might start writing again, but she’s not putting pressure on herself. “It’s great if people are creative, but if we just manage the stress and anxiety and get to the other side, that’s good as well.”

Did she enjoy her lockdown birthday presents? “I would have really loved a bike, but we didn’t get there because we’ve really been stuck inside,” she says. “But I was happy with toilet roll and hand sanitiser for now.”

I want to avoid the rabbit hole of stress. I get drip-fed what’s going on, but I don’t seek it out

She says she’s walking and cycling for exercise right now. “Brian’s bike is way too big for me. It gives me a giant wedgie, and I have to use my daughter Sadie’s scooter helmet, but at least it gets me out and up and down the road… Brian’s bike and Sadie’s helmet. The neighbours must all be going, ‘Is she okay? Amy is not coping well.”

What else is keeping anxiety at bay? She has stopped watching the news, she says. “I want to avoid the rabbit hole of stress… I get drip-fed what’s going on, but I don’t seek it out. I listen to a really good Elizabeth Day podcast [How to Fail]. In the most recent one she speaks to Mo Gawdat [chief executive officer at Google X and author of Solve for Happy] about managing anxiety during the coronavirus. It was really, really good. Maybe I’m living in cloud cuckoo land, but I want the things that give you perspective, temper the anxiety a bit.”

She has also, if her Instagram page is anything to go by, been putting nail varnish on plastic gloves and googly eyes on avocados. “Those googly eyes are brilliant,” she says.

What are the kids doing to keep entertained? “We got a puppy a while ago, which was a saving grace. That takes up a lot of our focus. They miss their friends, particularly my daughter, but they can FaceTime each other. It’s just going back to basics. Playing in the garden. Playing Lego and watching cartoons. Inevitable screen time and trying to make some of that educational.

“It’s a big change in their small world, but everyone is in the same situation. Everyone is at home. We’ll all see each other again.”

Do Androids Dream of Electric Sheep? A metaphysical detective story