All the hokum that had been happily discarded became, in Martin McDonagh’s hands, a workable proposition again. It didn’t occur to me that an intelligent American dramatist such as John Patrick Shanley might look at those plays and miss all the layers of mockery and irony and manipulation 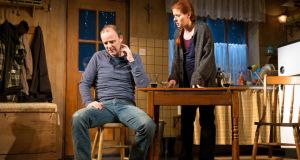 When plays are bad, their badness is usually easy to explain. Occasionally, though, there is a play whose woefulness demands a whole new theory. John Patrick Shanley’s faux-Irish drama Outside Mullingar , currently on Broadway, is mystifyingly awful. The obvious explanation, that Shanley can’t write, doesn’t get us very far. He won the Tony Award and the Pulitzer Prize for Doubt , and an Oscar for Moonstruck . Neither is especially to my taste, but they are at worst highly competent and professional. They don’t prepare you for the moments in Outside Mullingar when you find yourself shaking your head in abject, surrendered, uncomprehending disbelief.

After much reflection, my theory about Outside Mullingar is what we might call the McDonagh Effect. Martin McDonagh took the ramshackle old Irish naturalistic play, with its odd mix of kitchen comedy and 19th-century melodrama, and made it look both easy and viable. All the old hokum that had been happily discarded became, in his hands, a workable proposition again. If you were Irish, of course, it was also obvious that his was a postmodern version of Irish hokum, utterly self-aware, drenched in irony, deliberately anachronistic and brilliantly deployed to manipulate an audience’s expectations.

It didn’t occur to me, at least, that an intelligent American dramatist might look at those McDonagh plays and miss all the layers of mockery and irony and manipulation. That it would be possible to think, Great, the Abbey play of the 1940s is up for grabs again – and to think this in all innocence, with no hint of malicious intent. The only way I can explain Outside Mullingar is to assume that poor Shanley was misled in this way. Even this doesn’t explain why nobody, especially the Irish people involved in the production, had a quiet word to put him right.

Outside Mullingar is set, well, outside Mullingar. The time is given in the programme as “recently”: we know this because there are references to Irish boxers winning medals at the Olympics. As the old farmer Tony Reilly (played by Peter Maloney) puts it, in a line that is all too typical, “Sure, we’re good with our fists, no surprise there.” But theatrically, it is set in a different time and place: the Abbey, some time between 1930 and 1959.

If you were to do a random cut-up of the rural social comedies that were the staple diet of that period, you would more than likely end up with most of the following elements: a funeral, cups of tea, a dispute about land, a dying parent, a will, a returned Yank, an ageing virgin son and the headstrong woman he is secretly in love with but has never got around to informing of his feelings. If you shuffled those cards a few times, you’d come up with the bones of Outside Mullingar . To complete the job, you’d have to have mistaken McDonagh’s dark surrealism for Oirish quirkiness and added enough of that to tip the whole thing from mere dullness into embarrassment.

In Outside Mullingar , we begin in Tony’s kitchen after the funeral of his nearest neighbour. We quickly establish three things. Tony is thinking of cutting his son, Anthony (played by Brían F O’Byrne), out of his will and leaving the farm to a Yankee nephew. The Reillys have been in dispute with the neighbour about a right of way. (The term “land-grabbing” is, I’m afraid, inevitable.) And the disputed land has passed to the neighbour’s daughter, the fiery Rosemary Muldoon (played by Debra Messing – Grace from Will & Grace ).

I would normally be careful about revealing how it all works out, but in this case it will hardly surprise readers that the resolution will involve two elements: (a) a deathbed scene of more than usually revolting sentimentality in which Tony makes it all right with Anthony; and (b) Anthony and Rosemary finally getting around to wearing the face off each other.

All of this would be weird in itself, especially as the pastiche of midcentury Irish drama is always slightly off-kilter. Shanley’s ear for Irish speech – he has cousins outside Mullingar – is not well enough tuned to avoid having people “go to church” or “pass on”. Messing’s Rosemary tries so hard at an Irish accent that her voice ends up drowning in the Atlantic. It doesn’t help that her mother is played by Dearbhla Molloy, whose precise characterisation makes you wonder where her daughter came from.

But what makes the whole thing almost unfathomably bad is that Shanley has some vague sense that McDonagh’s plays do something more. Hence we have rain falling outside the cottage window as in the Druid production of The Beauty Queen of Leenane and the casting of O’Byrne from that same production. Rosemary has elements of Slippy Helen from The Cripple of Inishmaan , and her resentment of Anthony goes back to a McDonaghesque childish slight. Worst of all, Anthony’s big revelation is an unintended parody of the way McDonagh inserts oddities and nonsequiturs. He explains that he has stayed away from Rosemary all these years because “I think I’m a bee”. This is not a joke or a metaphor: he thinks he’s a bee. I tried to convince myself that I was an ice-cube so I could melt into the ground in embarrassment.

Are the Irish different? Getting to the heart of the national psyche