Our Shirley Valentine Summer: Scorned women back in the ITV spotlight 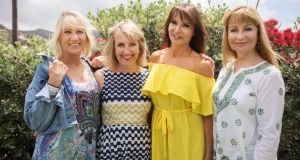 Now that the last lilo of Love Island has been deflated, it would be easy to assume that the sun has finally set on reality telly romance until the new season of First Dates begins. Thankfully ITV hasn’t given up on summer love completely and have packed off eight hopeful single ladies of a certain age to Greece on a voyage of self-discovery.

Like the BBC’s surprise hit The Real Marigold Hotel, Our Shirley Valentine Summer (yes, really) is the latest in the genre of “gentle” reality shows that use a film title to attract a ready-made audience. The show gathers together famous divorcees and renowned terminal singletons on the Greek island of Naxos in an attempt to find themselves and maybe reignite the flames of love just as Pauline Collins’ iconic character did almost 30 years ago.

These women carry their emotional baggage alongside their designer suitcases. They expose the vulnerable side of the tabloid tales, the women scorned that carry on quietly after the scorching spotlight has been dimmed. Theirs is the empty psychological hangover suffered after their private lives have been split open and rummaged around in like an errant bin bag by the public until another distraction arrives. Some, like Ingrid Tarrant (Chris Tarrant’s ex-wife) still seem raw and wounded, the stockpiled hurt blazing in her eyes as she speaks of her ex-husband’s infidelity. Within the opening minutes of the first episode she readily admits that she hasn’t had sex in the 11 years she’s been divorced.

A month-long holiday in the sun with weather woman Sian Lloyd and professional house-cleaner Aggie MacKenzie isn’t about to cure Ingrid’s woes. Going on her first date ever she manages to do an impression of her pet pig, crouching down in front of her bemused dinner companion before apologising and telling him it “looks better when I wear leggings” later that night she ends up sharing her room with a wild goat with loose bowels called Yoghurt.

The show is that familiar reality TV mix of celebration, embarrassment and self loathing. Socialite Lizzie Cundy tries valiantly to embrace her 50th birthday before dissolving into tears gripping her wine glass as the other women talk about how they marked their own big birthdays. Comedian Ninia Benjamin shares the most heart-wrenching story of all as she recalls lying in bed alone with her phone off, shutting out the world. She is at odds with the group of mothers and ex-wives being childless and having never had a long-term relationship, which would have been an interesting subject to explore if presenter Annabel Giles hadn’t shut the conversation down by snapping that at least Benjamin had been “spared” the agony of a divorce or separation. There is the distinct feeling that the show mires the women in their past pain but there is also something refreshing and liberating in hearing the aforementioned Aggie triumphantly chat about the great sex to be had in your 60s.

Cundy manages to pick herself up the next day by flirting with the group’s hired language instructor who just happens to be the hunk next door. As Lizzie squeezes in closer beside the swarthy suitor peppering him with mildly intrusive questions, Sian haughtily dismisses him, declaring that she doesn’t find bad boys or overtly pretty boys attractive which should be obvious given that she’s Lembit Opik’s ex partner.

The group go on speed-dating exercises and visit dating agencies trembling with anticipation and anxiety like meek schoolgirls, well apart from Nancy Dell’Ollio. It’s no surprise that the true saving grace and star of the show is Dell’Olio. At the dating agency she states her baseline requirements “If he has a helicopter even better, I am joking but well, really I’m not”, her staccato laugh terrifying poor sweaty George sitting behind his desk in a nondescript office above a bakery. He was not expecting Nancy.

With her delightfully oversized personality (like Dawn French doing an impression of Penelope Cruz as Donatella Versace) and outrageous self-confidence, she is the furthest thing from the defeated apologists that surround her. Breezing about the place in her turban and satin dressing gown it’s as if she’s on an entirely different show, taking it upon herself to dispense advice to everyone, not wanting to be pitied or thought of as a victim, Nancy is not here to make friends, or enter into some kind of celebrity cry-fest: Nancy is here to drink champagne and find a man. There’s no bare face at breakfast or casual wear for our Nancy, she is all glam all the time and if that means wobbling down to the beach in knee-high wedge heeled boots, so be it. She refuses to show weakness even when all the women huddle together to collectively roll their eyes at her divaesque qualities. As she surveys the group from the balcony like a malevolent dictator, Ingrid watches on in amused awe commenting “She’s a real man’s man” before realising her faux pas.

If the women really want to kick start their confidence they should forget about “vagina shaking” dance sessions or hand wringing self flagellation and instead do as Nancy does: rock up to the nearest taverna in the sun, pop open some champagne and truly treat themselves like the heroine of their own film.