‘Love Island’ winners are planning to get married ‘next year’ 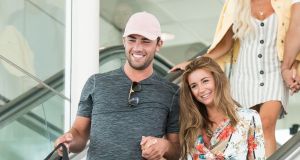 Love Island winners Dani Dyer and Jack Fincham are “getting married next year”.

Jack declared the couple will tie the knot in 2019, while Dani — daughter of EastEnders star Danny Dyer — said they would be moving in together after the summer.

The victorious couple and their fellow finalists arrived back in the UK amid joyful scenes at London Stansted Airport on Tuesday afternoon.

Hundreds of fans, along with family, friends and members of the media, turned out to welcome them home.

Revealing his marriage plans, Jack (26) told The Sun: “We’re getting married next year, 100 per cent. Like my mum said to me so many times, ‘When you know about someone, you just know’.

“And now I know what she’s talking about.”

Dani (21) added: “It ain’t about planning when we’re gonna have kids.

“It’s about enjoying a bit of time outside the villa now. And when we’re both ready, we will talk about it. Right now I’m just happy to be with him.”

However, the actor (41) has praised Jack for being a “proper geezer” and has given their relationship his stamp of approval.

The next step will be moving in together, which Jack described as “the only logical thing to do” having already spent two months under the same roof.

Dani said they were planning to enjoy the rest of the summer before getting down to the business of “looking for settees and that”.

The couple bagged the ITV show’s £50,000 prize on Monday and could make far in excess of that with their newfound fame.

However, Jack said he would remain down-to-earth and go back to his stationery sales job.

He insisted that he would be happiest if his days simply ended with the pair coming home to each other after work.

Jack and Dani spent eight weeks as a couple in the Love Island Majorcan villa, and were the only pair to be a couple from the beginning.

Voting figures from ITV have shown they were the favourites with viewers from the start and won by a landslide, taking 79.66 per cent of the public vote.

The last episode of the series also broke viewing records for ITV2, drawing an average of 3.6 million viewers and a peak of 4.1 million in the overnight ratings. – PA

Patrick Freyne: The Late Late Toy Show is coming, there’s no need to be afraid
4

Michael Kiwanuka: ‘If you’re a creative, you don’t try and be that, you just are’
8