One World: Together At Home review - Lots of glamour but where was the anger?

Musicians like Stevie Wonder, Paul McCartney, The Rolling Stones Beyonce and Lady Gaga performed from their homes for the "One World, Together from Home" online concert. 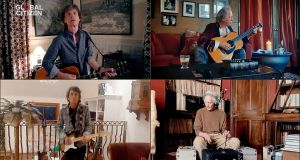 Not since Bob Geldof swore up a streak in front of millions of Live Aid viewers in 1985 has television witnessed a celebrity jamboree as glittering as One World: Together At Home.

The Rolling Stones gamely reach out from their cocooned palaces via web-cam. Jennifer Lopez delivers a gorgeous Barbra Streisand cover from her own private candlelit forest. Paul McCartney bashes out Lady Madonna from a kitchen 90 per cent comprised of shiny mahogany. Truly, this is an evening to suit every taste - musically and also in terms of home furnishings.

There are, moreover, genuine moments of joy and silliness in an event dedicated to healthcare workers on the frontline of the fight against Covid-19. Taylor Swift wins the night performing Soon You’ll Get Better. And who could have guessed annoying American TV host Jimmy Fallon covering Men Without Hats’s Safety Dance with accompaniment from The Roots would bring some light into yet another purgatorial Sunday?

One World: Together At Home has been organised by Lady GaGa in collaboration with Tipperary business man Declan Kelly. And there is a charming segment in the RTÉ broadcast where members of the Irish public reveal what they’re missing most about day to day life during enforced isolation.

However, RTÉ has otherwise decided to essentially transmit the concert as originally aired in the US on Saturday (we hear from Minster for Foreign Affairs Simon Coveney and staff from St Vincent’s Hospital, Dublin at the end). That is in contrast to the BBC which has curated its own mini-Together At Home festival, with original performances such as Rag ‘n’ Bone Man singing Blowin’ in the Wind (verdict: you wished the wind was blowin’ in another direction).

The “banter” between presenters Eoghan McDermott and Doireann Garrihy, for its part, falls short of rib-tickling (my ribs were at best mildly amused). Sensitive viewers will have already been unsettled by McDermott’s Lovecraftian horror show waist-coat. In their defence - though not the waist-coat’s - it must be eerie presenting from an empty studio, with only two low-hanging light bulbs for company. There are tough gigs and then there’s fronting a celebrity telethon during a once-in-a century pandemic.

Irish talent, meanwhile, is absent from the international broadcast. One Direction’s Niall Horan, Picture This and Hozier (who got out ahead of the rest of us by giving up cutting his hair years ago) are instead shunted to a six-hour curtain raiser which you can watch on YouTube.

But aside from Hozier’s hair what is truly missing from the evening is a flash of anger. Some countries have reacted promptly and efficiently to the spread of the disease. In others, however, containment efforts have been shambolic. It would have been nice for someone to say this: for One World to have had its Geldof “give us your f***ing money” moment. But it isn’t to be.

Instead lots of glamorous people offer up their hope and solidarity. And if their message that we’re all in this together is by now over-familiar and verging on a platitude, that doesn’t make it any less true.