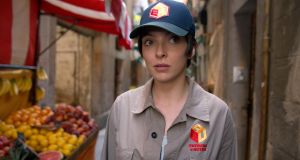 “Give me back my beast.” That was Greta Garbo’s famous (perhaps apocryphal) plea after she saw Jean Cocteau’s Beauty and the Beast. It echoed in my head as I watched the new season of Killing Eve: Give us back our beast. Give us back our Villanelle.

For season three (RTÉ One, Tuesday, 10.15pm) the show has changed up its staff again, replacing Fennell with Suzanne Heathcote, a writer on Fear the Walking Dead, and using all new writers and directors (through the five episodes available for review). And this time the news isn’t so good.

Killing Eve isn’t a bad show now, but it’s a different show, in depressing ways – less vital, more ordinary. It is still shocking here and there, but largely devoid of surprise. A mordant and sexy comic thriller edged with terror has become a competent psychodrama bordered with sentimentality. The air has gone out of it.

A discussion of the situation as the season opens necessarily deals in spoilers (you’ve been warned), given that season three ended with the happily demented assassin, Villanelle (Jodie Comer), shooting her frenemy, MI6 agent Eve (Sandra Oh), and leaving her for dead. Eve has survived, of course, but she is far off her game and she has left the spy business to take a job as a prep cook in a Korean restaurant in suburban London.

The restaurant gig – an extended sight gag, more or less – isn’t very convincing, and not only because Oh is awfully slow at folding mandu. It’s one in a series of situations and set pieces – a slow-motion melee at a wedding, a Russian farm family engaged in an Elton John singalong, a pair of killers in clown costumes at a children’s party – in which the quirkiness feels forced, a disappointment in a show that continually made a virtue out of implausibility.

The show’s new ordinariness comes from all sides – violence and death don’t have the impact they used to, either. The brutal killings of several longtime characters are upsetting because we’ve grown attached to them, but they don’t have the slightly grotesque, galvanising comic charge we’re used to. They just move the story along.

One of them, early on, is the jolt Eve needs to get back into the game – although her post-traumatic malaise lingers – and soon she’s once again on the trail of the Spectre-like criminal conspiracy known as the Twelve, with the grudging help of journalists at an online magazine amusingly named The Bitter Pill. Villanelle, meanwhile, is up for promotion, auditioning for a management job by carrying out a series of killings under the supervision of a new handler, a former Russian gymnastics coach played by Harriet Walter.

Eve and Villanelle still can’t quit each other, of course, but their paths rarely cross in the season’s first half. What we do get is an extended and not very interesting trip into Villanelle’s backstory, exploring the question of whether her winsome psychopathy was a matter of nature or misnurture.

This new focus on psychology, and on the mechanics of the plot, is not ideal. Story has never been the strength of Killing Eve, which twirled in the higher realms of style and satire. And the new season, crucially, does no favours to Comer, whose Emmy-winning performance as Villanelle has always been an exterior creation, a highly skilled collection of mannerisms, vocal inflections and sly mugging. It works splendidly for a character we’re supposed to be simultaneously thrilled and horrified by, not so well for a character we’re being asked to feel sorry for.

What remains is not negligible. There’s still a fair bit of clever dialogue (“Just so you know, I’m kind of a big deal in this industry,” Villanelle, with her habit of inappropriate boasting, tells a neophyte hitman). There are still the polished comic performances of old pros like Fiona Shaw as a British spymaster and Kim Bodnia as Villanelle’s former handler.

And there is still, at the heart of the show, Oh’s touching, utterly grounded and effortlessly hilarious portrayal of Eve, the spy who came in from left field. Villanelle is the crowd pleaser, but Eve, with her red wine habit and her big practical handbags, is the show’s indispensable element, and Oh inhabits her completely. Slumped at a desk, gorging on junk food, sniffing her own armpits with detached consternation, she continually demonstrates why the show has Eve in its title. – New York Times

Borg vs McEnroe: the power and the fury
10