Operation Transformation: The choir assembled on Zoom would melt a heart of stone

Review: This special Covid-19 Keeping Well Apart edition more about the health of the head rather than the body 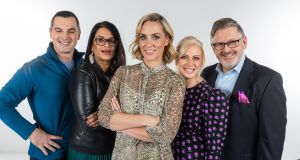 When it first looked as if RTÉ would be sending its weighing-scale-armed Operation Transformation crew into people’s lives at this of all times, it sounded like an act of brutish sadism. Because the last thing anyone needs right now is to be weighed. Things are bad enough.

Mercifully, then, there wasn’t a sign of a scales in Operation Transformation – Keeping Well Apart (RTÉ One, Wednesday, 9.35 pm). This special version of the show is much more about checking the health of the head rather than the body.

That’s not to say our current physical condition was overlooked – fitness expert Karl Henry set two ad-break challenges where he ordered us up off our couches to jog on the spot and then do the Jumping Jack for the entire duration of the break. (It’s funny how one minute, 52 and a half seconds can feel like a week and a quarter).

Most of the show, though, involved checking in on families around the country to see how they were coping with lockdown, with GP Dr Sumi Dunne and clinical psychologist Dr Eddie Murphy offering them advice.

They were all having their challenges, not least the couples with children to keep occupied. As Sara Ryan in Cappamore, Co Limerick, who’s trying to work from home, said to her husband Dave, with whom she has three and four-year-old sons: “Go 2km with them – and stay there!”

But it was 61-year-old Ann Brophy, who lives alone in a third-floor apartment in Dublin, who was struggling more than most. Because of a number of health conditions, Ann has been cocooning for the past few weeks, so cannot venture further than her balcony. And the loneliness of the experience was getting in on her. “That sense of freedom is gone,” she said. “Suddenly you realise the only person you can really depend on is yourself.”

She passes her time watching people in the park below “living a life, with their families, their kids, their friends, and you’re up here and there’s nothing”. She feels like James Stewart in Rear Window, “only I don’t have a murder to solve”.

The arrival of Operation Transformation in her life was, then, a blessing rather an intrusion, the camera man on the crane outside her balcony the closest human company she’s had in weeks.

“What do you miss most,” presenter Kathryn Thomas asked her.  “People,” said Ann.

She mightn’t miss Karl, though, when this is all over. After looking at her Fitbit stats, which is as offensive as reading someone’s diary or rummaging through their knickers’ drawer, he set her some exercise challenges when she thought she was doing just grand bringing in the shopping from her doorstep. “That is what I call an aerobics class,” she said.

And on top of that challenge, she had to join the others on Zoom through the week when a music teacher tried to teach them all how to sing.

“If it’s a competition to make people put their tellies on mute, I think I’ll win it,” said Dave.

But come the end of the show, the Operation Transformation choir assembled on Zoom to sing Kodaline’s All I Want. If there wasn’t something in your eye, then you’ve a heart of stone.

“This will pass,” Dr Eddie promised them, “you will have a life outside again.”

That’s all they want.

Michael Douglas on playing Liberace - the man behind the candelabra
7

‘In five seconds my life changed. I was worse than the worst jazz snob’
Real news has value SUBSCRIBE