Analysis suggests that, at best, there may be three more infection cycles before possible herd immunity occurs 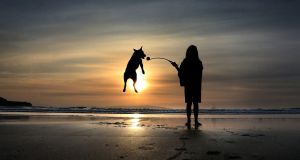 A youngster and her puppy, Jack, on the beach at Portrush in Co Antrim as the sun goes down. Due to the coronavirus pandemic, visitors from outside the area have been warned to stay away from the causeway coast. Photograph: Margaret McLaughlin

Ireland may have to cope with repeated waves of Covid-19 epidemics until a large enough proportion of the population is infected to provide possible herd immunity, new research warns.

At best, there may be three more cycles of infection before 60 per cent of the population have the virus, regarded as sufficient to provide potential herd immunity, according to the modelling analysis led by an Irish scientist at King’s College London.

However, it could take up to nine further waves of infection – and ensuing lockdowns – before possible herd immunity is reached, under a second model developed by Dr Rosalyn Moran and her fellow researchers.

The issue of herd immunity has been the subject of intense debate however during the Covid-19 pandemic with WHO epidemiologists warning in recent days that there was no proof yet that having had a coronavirus infection will confer immunity for a significant period of time.

The current outbreak in Ireland is peaking around now, according to the King’s College analysis, which estimates the eventual cumulative death toll at between 1,008 and 1,250.

Dr Moran emphasises there is “nothing set in stone” about the modelling predictions made in the research which, she says, shows the need for Ireland to replicate South Korean levels of testing for the virus and contact tracing for known cases.

The number of deaths and confirmed cases reported in the Republic on Sunday both showed a slight decline on recent days. Another 39 people died from Covid-19, while there were a further 493 confirmed cases of the virus, the Health Protection Surveillance Centre said.

There have now been 610 Covid-19-related deaths in the State, while the number of confirmed cases stands at 15,251.

Minister for Health Simon Harris said on Sunday night he feared an air of complacency was “creeping in” in relation to Ireland’s battle against Covid-19 which has to be pushed back against. “We are making really good progress ... but the progress is fragile. We are in a very delicate moment and it would not take much for that to be reversed,” he said.

He appealed to people not to become relaxed about the restrictions. “Now is not the time for complacency ... that would be disastrous, it could potentially be fatal,” he added.

All but two of the deaths reported on Sunday were in the east of the country.

The research, which looked at the number of “lockdown cycles” that may be needed in seven European countries, says a large proportion of the total population in each country will remain without immunity after the current wave of infection.

“This suggests that in the absence of strong seasonal effects, new medications or more comprehensive contact tracing, a further set of epidemic waves in different geographic centres are likely. These findings may have implications for ‘exit strategies’ from any lockdown stage.”

The Health Service Executive said yesterday it has eliminated the backlog of people waiting for Covid-19 tests. It said 27 laboratories, including one in Germany, are now processing 10,000 test results a day.

Over the weekend, 4,000 staff and residents in nursing homes were tested as part of a heightened response by the HSE to escalating cases and deaths in the sector. The number of outbreaks or suspected outbreaks in long-term residential care facilities now stands at 248, according to the HSE.

Meanwhile, the biggest teachers’ union in the State has warned the health and safety of pupils and teaching staff must be guaranteed before any decision is taken to reopen primary schools.

The Irish National Teachers Organisation (INTO) was responding to comments by Mr Harris, who raised the possibility of a partial reopening of schools at the weekend.

If schools do reopen it could be on the basis of a day a week, the Minister suggested.

But last night Mr Harris said: “We are going to have this virus with us for a long time. I don’t expect a light switch moment on the 5th of May where restrictions which are in place are all of a sudden reversed.”

Meanwhile Taoiseach Leo Varadkar was due to receive on Sunday night the results of a review into the rules around foreign workers and travel.

Mr Varadkar ordered the review after fruit producer Keelings flew almost 200 Bulgarians into Ireland to work on its farms.

The 189 workers arrived into Dublin on a chartered aircraft last week to carry out seasonal work on Keelings fruit farms. It is understood that a series of options will be presented in the paper which will then be considered by the Cabinet Covid 19 committee on Monday. A Government source said the issue was “difficult” as the workers could be considered essential workers, but concerns remained about the safety of the travel arrangements.

Sources said one option that is likely to be considered on foot of the review is checking in on those who travel into Ireland to ensure that they remain in isolation for the designated 14 day period.

There are now more than 2.3 million cases of coronavirus around the world and more than 160,000 deaths, according to tracking by Johns Hopkins University.

1 Coronavirus: Non-essential travel from US set to be banned within days
2 Covid-19 incidence in the Republic set to surpass that of UK
3 ‘Our hearts are broken’ – implications of fresh lockdown sink in
4 Taoiseach tested twice for Covid-19 but excused quarantine after Brussels trip
5 New call centre at Dublin Airport to track arriving passengers
Real news has value SUBSCRIBE