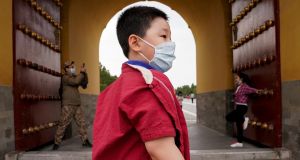 The novel coronavirus known as Covid-19 has infected more than 2 million people around the world, with the death toll from the virus now standing at almost 160,000. The confirmed coronavirus death toll in Europe approached 100,000 on Sunday, according to the Johns Hopkins University tally, but infection rates continued to slow.

Spain has reported its lowest daily death total for confirmed coronavirus victims in nearly a month, as the country fights to contain a savage outbreak that has killed more than 20,000 people there.

Spain’s health officials said on Sunday another 410 people have died in the last 24 hours. That is the lowest daily death toll since March 22nd, and takes the total number of fatalities to 20,453. Spain also reported 4,218 confirmed new cases of Covid-19, pushing the total number of cases there to 195,944.

Spanish prime minister Pedro Sánchez announced on Saturday that he will seek a two-week extension of the state of emergency in the country that is set to run out next week. But he also said the government will begin to ease tough lockdown measures to allow children to leave their homes from April 27th.

France’s national health agency said the number of virus patients in intensive care had dropped for the 10th day in a row, while the number of overall virus cases in hospital has fallen for three consecutive days.

The total number of deaths in France from Covid-19 has reached 19,323. Nursing home deaths amount to more than one-third of the total.

Italy said on Sunday that deaths from the coronavirus pandemic had risen by 433, the lowest such daily tally in a week. The number of new cases there slowed to 3,047 from a previous increase of 3,491.

Poland saw its biggest spike in coronavirus cases on Sunday with 545 new infections recorded, according to health ministry data, a day before the country plans to ease some of its pandemic-related restrictions. As of Sunday, Poland had 9,287 confirmed cases and 360 deaths.

Germany will permit small retail spaces to reopen from Monday alongside car dealerships, cycling stores and bookshops, though people will be urgently advised to wear masks while in public. Poland will reopen parks and forests from Monday. Children in Norway will also return to kindergarten, and open-air markets in the Czech Republic will be permitted to trade as part of a six-week strategy to gradually lift restrictions.

“The situation is completely under control,” president Vladimir Putin said in a Russian Orthodox Easter address focused on the impact of coronavirus. “We have everything we need: a healthy, strong economy, scientific potential, medical resources and a highly professional healthcare system.”

Of the new cases, five were imported from overseas, the Korea Centres for Disease Control and Prevention (KCDC) said. The death toll rose to 234.

It was the first time since February 18th that South Korea reported such a single-digit daily rise. The figure brings its total infections to 10,661.

US president Donald Trump warned China on Saturday that it should face consequences if it was “knowingly responsible” for the coronavirus pandemic, as he ratcheted up criticism of Beijing over its handling of the outbreak.

“It could have been stopped in China before it started and it wasn’t, and the whole world is suffering because of it,” Mr Trump told a daily White House briefing.

“If it was a mistake, a mistake is a mistake. But if they were knowingly responsible, yeah, I mean, then sure there should be consequences,” Mr Trump said. He did not elaborate on what actions the US might take.

Mr Trump and senior aides have accused China of a lack of transparency after the Covid-19 virus broke out late last year in the Chinese city of Wuhan. This week he suspended aid to the World Health Organisation, accusing it of being “China-centric”.

Data from Johns Hopkins University showed the death toll in the US has now risen to 41,379, more than double the total a week ago.

New York state, the epicentre of the US outbreak, has seen hospitalisations decline and the number of patients being kept alive by ventilators fall. There were 507 new deaths reported on Sunday, down from a high of more than 700 a day. “If the data holds and if this trend holds, we are past the high point and all indications at this point are that we are on a descent,” governor Andrew Cuomo said at a daily briefing, while urging residents to continue social distancing. “We showed you can control the beast. But it’s only half time. We still have to make sure we keep the beast down.”

Japan’s health ministry said 568 new cases of coronavirus were reported on Saturday, bringing the domestic total to 10,361. A combined total including 712 other cases from a cruise ship quarantined near Tokyo earlier this year comes to 11,073, with 174 deaths.

The number of cases is still relatively small compared with the US and Europe, but Japan’s testing is limited and actual infections are believed to be far more widespread.

Japanese prime minister Shinzo Abe on Thursday expanded a state of emergency, which was limited to Tokyo and six other urban areas, to all of Japan in a bid to prevent further spread of the virus nationwide, amid concerns that hospitals are already overburdened with the influx of patients.

Protesters in lorries and cars and on motorcycles honked horns on the streets of Rio de Janeiro, São Paulo and the capital Brasilia, calling for regional governors to resign over lockdown measures that have forced most businesses to close for weeks.

Mr Bolsonaro has been a fierce critic of the states’ stay-at-home measures, arguing that the resulting economic harm could be more damaging than the virus. The protests took place after his recent firing of his health minister, who had been promoting isolation measures.

Chile reported on Sunday that there were more than 10,000 people in the country with coronavirus, the third-highest tally in Latin America, as the virus ravages the economy of the world’s top copper producer.

Australia on Sunday added to growing pressure on China over its handling of Covid-19, questioning its transparency and demanding an international investigation into the origins of the virus and how it spread.

Australia’s foreign minister, Marise Payne, said her concern about China’s transparency was at a “a very high point”. “The issues around the coronavirus are issues for independent review, and I think that it is important that we do that,” Ms Payne told ABC television. “In fact, Australia will absolutely insist on that.”

Australia has managed to get its epidemic under control before it strained its public health system, reporting 53 new cases on Sunday. The latest cases took its total to 6,586, according to health ministry data. There have been 71 deaths in Australia. The rate of increase in new cases has been below 1 per cent for seven consecutive days – much lower than in many other countries.

Turkey’s health minister has said a total of 2,017 people have died of coronavirus in the country, with 127 new deaths in the last 24 hours. Fahrettin Koca said 3,977 new infections had been confirmed in the past day, bringing the total number to 86,306.

In Iran, British-Iranian prisoner Nazanin Zaghari-Ratcliffe’s wait continues to find out if her temporary release from jail has been extended. Ms Zaghari-Ratcliffe had been temporarily freed from Evin prison in Tehran in response to the Covid-19 pandemic. Her furlough was extended by two weeks in late March, and she was scheduled to return to prison on Saturday. When her family had not received a decision by Saturday on whether or not her furlough was to be extended again, they were told to return to the Prosecutor’s Office in Iran on Sunday – but have now been told to come back on Tuesday.

Zimbabwe’s president Emmerson Mnangagwa on Sunday extended a lockdown to contain the spread of coronavirus by two weeks, but will allow mining companies to get back to work. Three people have died from the virus out of the 25 confirmed infected in the southern African country, but health experts expect the figures to rise once authorities ramp up testing. – Agencies