Most pubs will ‘close for good’ if lockdown lasts to 2021, vintners say 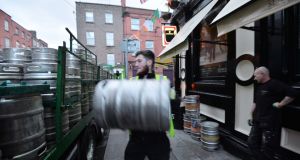 Heineken Ireland has put its staff on a four day week for two months due to the fall off in demand for its beer products since the lockdown began. File image: Alan Betson / The Irish Times

The possibility that pubs may not reopen until a vaccine for Covid-19 has been found has been described as a “nightmare scenario” by the body that represents Dublin publicans.

The Licensed Vintners Association (LVA) said many pubs will be put out of business permanently if such a lengthy closure occurs.

It was commenting after Heineken Ireland put its staff on a four day week for two months due to the fall off in demand for its beer products since the lockdown began.

Heineken Ireland declined to comment on the work changes but The Irish Times has established that the company’s 400 or so employees were informed by letter earlier this month of the planned work reduction.

It is understood that staff were informed that all employees would be moving to a four day week at the start of May and the new working arrangement would remain in place for May and June.

The vast majority of the company’s employees work at or out of the company’s Lady’s Well Brewery on Leitrim Street in Cork while a smaller number work in its Dublin office with others involved in sales operating on the road.

Heineken Ireland make not only Heineken but also Murphy’s and Beamish stouts, Orchard Thieves cider and Coors Light and Foster lagers at the Cork brewery.

Minister for Health Simon Harris said at the weekend he could not see how people could return to “packed pubs” as long as the virus was still in the community and in the absence of a vaccine.

“If that happens then most pubs in this country will be out of business for good.”

He said the LVA and its members would support whatever measures were deemed necessary in the interests of public health, as they had done from the beginning of the crisis.

“But if closing pubs until 2021 is going to be necessary then it is essential that a pub-specific support scheme is introduced. Otherwise there won’t be a pub industry in this country by the time a vaccine is found.”

The LVA welcomed the strong Government support for the 50,000 staff laid off as a result of the crisis, he said.

“This will have to be extended for the duration of the pub closure period. However unless it is supplemented with a specific support scheme to keep the pubs themselves afloat, the staff will have no jobs to return to.”

While Mr Harris was doing an exceptional job at a time of national crisis, his comments “have really petrified the entire pub sector across the country and many are now concerned not only about how to survive this pandemic, but also whether they will still have a business when this crisis eventually passes,” Mr O’Keeffe added.