Frankie Boyle goes to Russia ahead of the World Cup, plus the final of Britain’s Got Talent 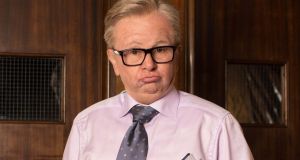 The guests on Graham’s sofa are Ethan Hawke, who stars in First Reformed, Toni Collette, starring in Hereditary, and Poldark star Aidan Turner, who is in the London’s West End with Martin McDonagh’s The Lieutenant of Inishmore. Jo Brand talks about her new film The More You Ignore Me. Plus music from Liam Payne, who performs Familiar.

Tracey Ullman is back for three new episodes of Tracey Breaks The News with her unique comic spin on the headlines, including her impressions of politicians and celebrities. Ullman will revisit her impressions of Jeremy Corbyn, Angela Merkel and Jerry Hall alongside Rupert Murdoch (Ben Miller); and brand new for this series is Michael Gove, and the hilarious new double act of Jacob Rees-Mogg (Liam Hourican) and his very long-suffering Nanny.

The most glamorous event in the soapland is celebrating its 20th birthday, and to mark the anniversary, it will be broadcast live for the first time. It’s certainly been a packed 12 months, with lots of storylines grabbing the attention, including Abi Branning’s death after falling off the Queen Vic roof in EastEnders, David Platt’s heartbreaking ordeal and Bethany being groomed in Coronation Street, Emma Barton wreaking havoc in Emmerdale, Rob’s PTSD in Doctors and Lily’s descent into self-harm in Hollyoaks; actors involved in each of those storylines are vying for trophies tonight. There are 16 awards up for grabs in total, with famous faces from the world of entertainment handing them out. As ever, Phillip Schofield hosts the proceedings.

Imagine being invited to spend a weekend at the home that Joan Plowright shared with her husband, Laurence Olivier. Plowright will be there, as well her fellow acting Dames Maggie Smith, Eileen Atkins and, of course, Judi Dench. What would you talk about? Probably not the weather, but certainly their long and hugely successful careers – how could you resist asking them what it’s like to work with various other luminaries, including the aforementioned Olivier? Although we won’t actually be present at this meeting, director Roger Michell is offering us the next best thing via this charming documentary – namely a chance to see the quartet together, discussing their lives to date complete with anecdotes and witty asides

All Round to Mrs Brown’s

Sunday, TV3, 7.30pm Declan Donnelly hosts the live final of the nationwide talent search as the 12th series draws to a climax. A wide variety of acts have stepped in front of judges Simon Cowell, Amanda Holden, Alesha Dixon and David Walliams eager to impress, and tonight the last remaining contestants will be putting in one last performance to earn the votes of the viewing public and get the chance to be crowned champion, win £250,000 (€286,000) and take to the stage in a coveted slot at this year’s Royal Variety Performance.

Journey in the Danger Zone: Iraq

Adnan Sarwar arrived in Iraq in 2003 as a 24 year-old soldier with the British army. He initially viewed his mission as liberating the country’s people from Saddam Hussein, but when parts of the population turned against the allied forces, Sarwar’s life was changed forever by an ambush which killed one of his friends. He saw first-hand how driving Saddam from power led to more violence, but now, with Islamic State largely defeated, he is travelling back to Iraq to discover the country afresh. He walks with mine-clearing teams in Mosul, joins wildlife conservationists releasing bears, meets pop singers, all-female fighting units, archaeologists, oil workers, LGBT activists and ordinary Iraqis from all walks of life. However, with sectarian violence, Islamic State sleeper cells and deadly bomb attacks still a reality, Sarwar asks whether the country can break its cycle of violence.

Promising to “go behind the stereotypes and half-truths of Russian football and culture” this two-part documentary sees comedian Frankie Boyle tour the country ahead of this month’s World Cup. He visits a sleepy seaside town preparing to host the England team, a city twinned with Glasgow that’s renowned for its football violence, joins a daredevil motorbike football team, records a rap with a hip-hop artist and learns how to wield a sabre from the Cossacks who will be policing the football stadiums. Set against the backdrop of spy poisoning, alleged state-sponsored doping and threats of ultra hooliganism that mark the worst relations between Russia and the West since the Cold War, can the notoriously spiky Scottish comic make some new friends?

Hugh Grant and Ben Whishaw star in the conclusion of Russell T Davies’s drama based on the true story of the downfall of political leader Jeremy Thorpe. Norman survives a bungled attempt on his life, and publicly accuses Jeremy of having hired the would-be killer to silence him – an act which finally brings their secret relationship into the public eye for the first time. With the world watching, the ensuing court case drags years of acrimony between the two men into the light, as a man who would be prime minister stands trial for conspiracy to murder.

To tie in with the conclusion of three-part drama A Very English Scandal on BBC One tonight, veteran reporter Tom Mangold looks back at the trial of Jeremy Thorpe for conspiracy to murder, using material recorded for Panorama at the time but which was never used as it presumed a guilty verdict would be returned. Although Thorpe and his co-defendants were all acquitted, the former MP’s public reputation was damaged irreparably by the case, and the fact he chose not to testify at the trial left several matters unexplained.