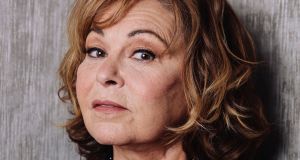 ABC television network in the US has cancelled comedian Roseanne Barr’s show after she posted a racist tweet comparing a former Obama adviser to an ape.

“Roseanne’s Twitter statement is abhorrent, repugnant and inconsistent with our values, and we have decided to cancel her show,” ABC Entertainment President Channing Dungey said in a statement.

Barr provoked online outrage after she said former Obama White House adviser Valerie Jarrett, who was born in Iran to American parents, has connections to the Muslim Brotherhood, and compared her to an ape. Barr wrote “Muslim brotherhood & planet of the apes had a baby=vj,” using Jarrett’s initials.

Barr (65) earlier apologised after she had attacked former Obama White House adviser Valerie Jarrett . The sitcom actor said: ”I apologise to Valerie Jarrett and to all Americans,” Barr tweeted. “I am truly sorry for making a bad joke about her politics and her looks. I should have known better. Forgive me – my joke was in bad taste.”

Barr was replying to a post from a user that accused Jarrett, a long-serving adviser to the president, of covering up the Obama administration’s alleged “misdeeds”.

I apologize to Valerie Jarrett and to all Americans. I am truly sorry for making a bad joke about her politics and her looks. I should have known better. Forgive me-my joke was in bad taste.

When a Twitter user told Barr that her tweet was offensive and racist – Jarrett is African American – Barr responded by writing: “Muslims r NOT a race.”

Shortly after, Barr reiterated her stance in another post: “ISLAM is not a RACE, lefties. Islam includes EVERY RACE of people.”

Barr’s tweets sparked a backlash from many prominent figures, including one of the sitcom’s top writers, Wanda Sykes, who announced that she would not be returning for the second season.

Barr’s co-star Sara Gilbert, who plays Darlene, condemned the tweets as “abhorrent”. Gilbert wrote: “Roseanne’s recent comments about Valerie Jarrett, and so much more, are abhorrent and do not reflect the beliefs of our cast and crew or anyone associated with our show. I am disappointed in her actions to say the least.”

Barr has been in the public eye recently after her eponymous sitcom returned after a two-decade hiatus. It has become ABC’s most-watched “new” series, averaging almost 18 million viewers per episode. In the show, Roseanne Conner plays a working-class Trump supporter, but Barr herself has not been shy about her allegiance to the president, frequently engaging with his critics online and peddling conspiracy theories shared by Trump’s base, such as “Pizzagate”, “Pedogate” and theories about the murder of former Democratic National Committee staffer Seth Rich.

Barr on Monday also attacked Chelsea Clinton on Twitter, writing “Chelsea Soros Clinton” and claiming the former first daughter is connected to George Soros. Barr said Soros wants to “overthrow” the “US constitutional republic by buying/backing candidates 4 local district attorney races who will ignore US law & favor ‘feelings’ instead-and call everyone who is alarmed by that ‘racist’.”

After Clinton replied with a tweet of her own, Barr apologized in sarcastic fashion. “Sorry to have tweeted incorrect info about you!,” she wrote , again invoking Soros, a frequent target of Trump and the right. “I Please forgive me! By the way, George Soros is a nazi who turned in his fellow Jews 2 be murdered in German concentration camps & stole their wealth-were you aware of that? But, we all make mistakes, right Chelsea?”

The writer Roxane Gay tweeted: “I told y’all about Roseanne. I told you. So.”

Morning Joe host Joe Scarborough joined calls for ABC to discipline Barr. He wrote in a tweet: “There is no apology she can make that justifies ABC turning a blind eye to this bigotry by airing another second of her show.”

He added: “Even in the Age of Trump, there are red lines that can never be crossed.” – Guardian, Reuters, PA