Is Childish Gambino the One True Donald?

The Meming of Life: ‘Atlanta’ and ‘This Is America’ star Donald Glover has taken over the internet – and his fans have hijacked a Trump reddit and effectively rebranded it 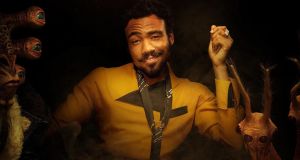 A few weeks back, the whole internet gathered en masse to worship at the feet of Donald Glover, the actor, writer, musician, rapper and comedian who appears incapable of doing any wrong.

Certainly his current slate of works seems pretty impressive, not least his groundbreaking, Emmy award-winning comedy series Atlanta, and the incredible This Is America song and video that catapulted his Childish Gambino music project from critics’ darling to bona fide cultural phenomenon.

This week Glover has neither a TV nor music project on the go, so has been left to slum it as one of the stars in Solo: A Star Wars Story. Playing the charming smuggler, huckster and mayor of Cloud City Lando Calrissian, Glover has already garnered headlines due to internet chatter that his character is canonically pan-sexual. This last nugget was pulled from scriptwriter Jonathan Kasdan who, regrettably, did little more than issue the statement in the same “Dumbledore is gay off-camera” way that JK Rowling first made famous.

Speaking to the Huffington Post, Kasdan said “there’s a fluidity to [his] sexuality” before adding, wistfully, “I would have loved to have gotten a more explicitly LGBT character into this movie”, neglecting to mention that he had a fairly good opportunity to do so when he actually wrote the thing.

If being a pan-sexual planetary pirate isn’t enough, Noisey reports a further branch of Glover fandom is seeking to square him off with an even more formidable foe, in a Donald-to-Donald war to declare the King of All Donalds.

The battleground was none other than Donald Trump reddit group TheDonald. On said page, which has 19,000 subscribers, one might once have found dozens of poorly researched, far-right memes about dodgy immigrants and illegal emails . After a concerted migration last week, however, the page was flooded with posts about the good Donald, such as the following checklist, displaying Glover’s improvements on the current commander-in-chief:

“Not a racist? Not a rapist? Can read? Was never bankrupt? Likes Mexicans? Talented? Pays his taxes? Handsome? This is the one true Donald”.

Before long the entire subreddit was subsumed with Glover memes, effectively rebranding the page in his image. Trump fans can, however, still content themselves with the site’s premier Donald fan reddit, The_Donald (note the underscore), which boasts a rather more impressive 600,000-plus subscribers. Although if Glover becomes any more popular, even their web administrators would be advised to fear an invasion of his fans. Perhaps it is time they built a firewall, and made Cloud City pay for it.