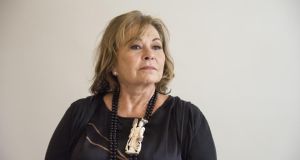 Roseanne Barr has torpedoed her career with a racist tweet in which she likened an African-American former aide to Barack Obama to an ape. But the real surprise was that anyone should be blindsided by her vitriol, which has just led ABC to announce it was cancelling her sitcom, Roseanne.

Long before the show’s blockbuster return this year, the comedian and actor had posted toxic views and barking conspiracy theories on social media. She was a catastrophe waiting to happen – and then became a catastrophe that was happening, in real time, right before our eyes.

None of this prevented ABC – and its image-obsessed parent, the Walt Disney Company – from rebooting Barr professionally with the relaunch of Roseanne, her blue-collar comedy, after 21 years off screen. The gamble looked to have paid off: 18 million viewers tuned in to the first episode, and critics agreed the show was bravely tackling issues affecting the “real” United States – the place that had voted in such numbers for Trump.

Roseanne certainly stood apart. Hearing Barr’s character, Roseanne Conner, and her estranged sister, Jackie (Laurie Metcalf), debate the presidential election – Roseanne had supported Trump, Jackie assuredly had not – felt like eavesdropping on the conversation the US was having with itself in the run-up to and aftermath of the vote. It humanised the existential divide racking the United States and asked the audience to consider that not everyone who went with Trump had horns and a Breitbart subscription.

The series laid bare the cash-strapped, hardscrabble reality for what would have once been described as the American middle classes. Becky, Roseanne’s widowed daughter, reveals she has lied about her age in order to become a surrogate mother and so earn the $50,000 she desperately needs to put her life back on track.

In one episode Roseanne has to overcome her prejudices to ask her Muslim neighbours for their wifi passwords. (“You don’t mean the news. You mean Fox News,” Jackie says after Roseanne says she has heard on television about terrorist “sleeper cells” hiding out in suburbia).

Her character’s comments about Muslims – she posits they are from “Talibanjistan” – were nonetheless widely condemned. “I like to do TV episodes about REAL ISSUES & REAL PEOPLE,” Barr said in response. “That’s what I do. Next season will be even more current events – I will challenge every sacred cow in USA.”

I apologize to Valerie Jarrett and to all Americans. I am truly sorry for making a bad joke about her politics and her looks. I should have known better. Forgive me-my joke was in bad taste.

i like to do TV episodes about REAL ISSUES & REAL PEOPLE. That's what I do. Next season will be even more current events-I will challenge every sacred cow in USA.

I wrote on the original "Roseanne" where we used to denounce nativism, racism & homophobia. Nauseating to see what she's become. Looking forward to continue not watching this show.

“Donald Trump dominates our attention universe to the point where he blocks out the sun. Is it any wonder that people don’t have any idea what Democrats stand for?” We have a very clear idea what #Democrats stand for: higher taxes, illegals, & free crap. https://t.co/p3qSBV2WAS

Still, in contrast to Barr’s abhorrent personal views, the programme had an essentially liberal outlook. Its consultant producer Wanda Sykes has campaigned for same-sex marriage; its writing staff included Whitney Cummings, creator of 2 Broke Girls and a comedian who has never been shy about her progressive perspective. (She called herself “the PC police” on set.) Theirs were the voices that came through on screen – not Barr’s.

Sykes was one of the first to respond to Barr’s remarks, announcing, before its cancellation, that she was done with Roseanne. The sentiment was echoed by Michael Fishman, who plays Roseanne’s son DJ, who described her tweet as reprehensible and intolerable, and by Emma Kenney, who played Roseanne’s granddaughter, and who had called her agent, to tell him she was quitting the show, when she learned that the plug had just been pulled on it.

Barr’s condemners also included Ricky Gervais, who took issue with the suggestion that the comic’s right to free expression had been curtailed. “This wasn’t censorship. This was business. She hasn’t been prosecuted. She hasn’t been silenced. She can carry on saying what she wants. It’s just that her employers have decided they don’t want to employ her any more.”

And Shonda Rhimes, the creator of Grey’s Anatomy, said Barr got what she deserved. “Roseanne made a choice,” she said. “A racist one. ABC made a choice. A human one.”

There were calls, too, for sponsors to walk away. Disney’s chief executive, Bob Iger, said the decision to cancel was “the right thing”.

One voice that has been silent is that of Donald Trump, who had tweeted his congratulations to Barr after the show’s return.

A remarkable aspect of the controversy is that Barr was once regarded as one of the entertainment industry’s most stridently left-wing voices. When the original Roseanne was on, in the late 1980s and through most of the 1990s, she called it “television’s first feminist and working-class sitcom”.

“I wrote on the original Roseanne where we used to denounce nativism, racism & homophobia,” Danny Zuker, an executive producer of ABC’s Modern Family, tweeted. “Nauseating to see what she’s become.”

She retweeted the actor James Woods’s assertion that ‘We have a very clear idea what #Democrats stand for: higher taxes, illegals, & free crap’

Roseanne’s message was ultimately one of tolerance. Roseanne and Jackie would never reconcile politically but could learn to love one another as sisters. And when Becky was told she was too old to be a surrogate, her family supported her and encouraged her to share her bottled-up grief about her late husband’s death.

How could this outlook be reconciled with Barr’s extreme positions? Ultimately it couldn’t, although this didn’t stop the network from trying. Last year the president of ABC Entertainment, Channing Dungey – who also took the decision to fire Barr on Tuesday – announced that the actor’s son would be taking over the Twitter account.

“That was all by her,” she told the Hollywood Reporter. “We did not ask her to do that, but she did make that decision. What we’ve heard from Roseanne is she is very excited about the show and wants to be very focused on the show. The writers’ room has just gotten started, and she’s going to be an active contributor to that.”

The handover appears not to have happened. Barr’s account continued to churn out crazy, offensive statements. She publicised the absurd pizzagate conspiracy and retweeted the actor James Woods’s assertion that “We have a very clear idea what #Democrats stand for: higher taxes, illegals, & free crap.” During an unlikely 2012 run for president with the fringe Peace and Freedom Party she claimed the Boston Marathon bombings were a “false flag” inside job.

Barr’s views are so odious that it was perhaps inevitable she would tweet something that would force ABC to sack her. Given her social-media history, should the network have thought twice about bringing her back in the first place? Could Roseanne have prospered without Roseanne? It’s question that surely ought to have been considered.