Momo challenge: how the viral hoax took on a life of its own 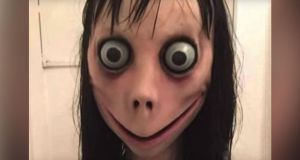 Garda and PSNI sources expressed concern over the Momo trend, though both said they had received no complaints.

By now, most people will have heard of the “Momo challenge.” The game allegedly encourages children and young people to contact an unknown number via WhatsApp, where they are then be tasked with a series of challenges by an anonymous user.

Reporting around the Momo challenge has suggested that children may be told to harm themselves and, in some instances, even attempt suicide by the game. It is accompanied by a hard-to-forget image of a woman with bulging eyes and a wide smile.

The Momo challenge has led to something of a panic – a response that would be justified if there was any hard evidence to prove that it is real. Despite a lack of proof, schools and even police forces have waded into the conversation, to warn parents to be hypervigilant of the frightening image – which is actually a photograph of a Japanese artwork.

That panic may only be taking hold in Ireland now, but it has been doing the rounds elsewhere since last year, when a 12-year-old girl in Argentina tragically died by suicide. A local news report later suggested that she might have been influenced by a new online trend called the Momo challenge.

Stories of the challenge spread to the UK and Ireland after some parents claimed that their children had come across it. These were subsequently picked up by local and national media outlets, which gave the story further momentum.

On Monday The Irish Times quoted Garda and PSNI sources, who expressed concern over the Momo trend, though both said they had received no complaints. This was followed by a report on Wednesday in which the Samaritans expressed concern over media “hysteria” around the Momo phenomenon, and other articles identifying it as a hoax.

At all stages, the story’s momentum has been aided by the power of social media, where people have been sharing posts claiming that “Momo” is cropping up in the middle of children’s YouTube videos.

In one viral Facebook post, a childish song is played over an image of the Japanese artwork, with the voice telling the viewer that Momo will kill them. However, nobody has been able to confirm that the video was actually on YouTube, and the video streaming platform has insisted that they are monitoring the situation closely, and have found no children’s content promoting the Momo challenge.

Panic surrounding the challenge is being heavily exacerbated by reports that the game could encourage children to self-harm, or to attempt suicide. Brendan Kelly, professor of psychiatry at Trinity College Dublin, says that public discussion around these topics tends to be driven by panic in the first place – and that reporting around this challenge is tapping into that panic.

“My view is that self-harm and suicide are best discussed and dealt with by focusing on facts and what is really happening,” he says. “The panic over this Momo challenge is so many steps removed from any concrete reality.”

Prof Kelly is concerned that the conversation around the Momo challenge trivialises self-harm and suicide, and notes that both are “multi-factorial.”

“In most cases, there are complex and either medium- or long-term factors at work. It’s disingenuous and almost dismissive of self-harm, which is really quite a profound act. It’s dismissive to draw a very simple causal link to a game that it turns out doesn’t exist in the way it has been reported to exist.

“It strips self-harm of its meaning if we are implying that it is done casually in response to something somebody sees on the internet, when in fact it is a more profound act that we need to sit with and talk through with somebody and look through layers of meaning.”

Alan Fahy – who runs his own Facebook marketing agency in Galway – says the mass panic around the Momo challenge is driven by online “share culture” where people share something without verifying that it is true.

“People will see that one of their friends has shared it, so it must be true,” Fahy says. “They don’t have to look into it because the other person probably looked into it, and on it goes.

“It’ll do circles,” he continues. “I see these things popping up year on year. This could pop up again in two years and it’ll have another name. People just don’t look into it, and people are paranoid, especially with regard to children.”

He also points out that Momo does not stand alone, and is related to a complex culture of online challenges. It is, in a sense, not dissimilar to the famous ice-bucket challenge of 2014, which also went viral. While that was for a good cause – to raise funds for charity – it was tied to the same viral culture.

Interestingly, the Momo challenge is not even close to being the first of its kind. In 2016, the Blue Whale Challenge gained traction across the world after a Russian newspaper reported that it had been linked to a number of youth suicides. That game had the same premise as the Momo challenge: it allegedly asked young people to perform a series of tasks, which began innocently, but ultimately moved towards self-harm and suicide.

It was later found to be a hoax, and no connection was ever found between the game and any suicides.

Both the Momo challenge and the Blue Whale challenge fall into the same category of internet subculture: they are impossible to prove, yielding little in way of concrete evidence, but are also impossible to debunk for those who want to believe in them.

While there is no evidence to prove that the Momo challenge is a threat, or is real, viral internet culture will continue to persuade many unsuspecting parents and children that something really is out to get them.