‘Celebs Go Dating’ participants only interested in love affairs with themselves 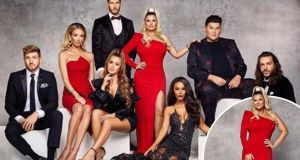 Participants of the sixth season of ‘Celebs Go Dating’

There are three types of behaviour necessary to survive Celebs Go Dating. Those that ensure maximum Twitter commentary and a permanent place on the Sidebar of Shame – or at least a derisive comment from Piers Morgan.

You can turn being dumb into an art form like the endearing Joey Essex, lean in to being a philandering scoundrel like “Muggy” Mike Thalassitis or be an entertaining diva like Gemma Collins.

These are the archetypes the show (now on its sixth season) thrives upon. It’s easy shorthand to help distinguish the ex-Hollyoakers from the ex-Ex on the Beachers.

Having run out of members of diversity to humiliate, this series sees Made in Chelsea fraggle Sam Thompson return along with Pete “The Pirate” Wicks from TOWIE (last seen mourning the death of Colin the pig on Bear Grylls’ island) and reality survivor Kerry Katona who all adhere to the roles assigned to them. There’s also the inclusion of “loyal” Love Island moppet Georgia Steel who is desperately intent on making her mark on the series by any means possible, confusing viewers with her grim attempts at being all three archetypes at once.

From the night of the first mixer (where the celebrities mingle with the plebs to find a date) she troops through the room asking the bemused boys to gather around her before dismissing them at will – one gets eliminated due to the unfortunate error of his top being “too bloody blue” a move that may sound amusing coming from a cheeky chancer like Charlotte Dawson but her delivery is that of an insecure, petulant teenager.

Later, on a date with a Welsh man-bun enthusiast she tries out a dim bimbo act confusing Wales with Ireland, asking did he take a boat to the date or a train that went underwater, blinking into his face with as much subtlety as a first-year drama student. It’s a painfully fake, attention-seeking exchange as most have witnessed Georgia being a lot sharper during her time on Love Island.

Instead of encouraging the young star to be happy with her self-assurance and challenge her dates to match her, Anna advises Georgia to let herself be “handled” by her next paramour giving weight to the notion that men essentially prefer docile creatures. With that advice ringing in her ears she happily listens to project manager Max witter on about his “traditional” values and how he is enjoying intimidating her.

Someone not willing to be handled, thankfully is Kerry who has spent the entire series thus far announcing her arrival like a tabloid headline “Mum of five, whose been married three times!” she booms upon entering the introductory brunch, the singles mixer, the restaurant, the taxi home, the queue in Tesco, delivering the punchline before a joke has been made. Kerry feels as though her life has been a cautionary tale, that she’s been reviled for years, and become a memeable figure of fun. There are layers of hurt and mistrust that she knows will not be resolved by a couple of weeks on a frothy reality show, so she’s here to make the most of it, cackling at would-be suitors, talking endlessly about herself and trying to make it through a meal without throwing her pornstar martini at someone.

Playing the diva, the fool or the lothario may make for intriguing viewing but ultimately the only relationship that truly concerns the participants of Celebs Go Dating is their long-lasting love affairs with themselves.