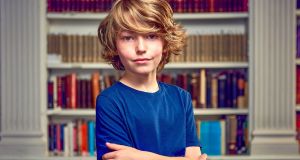 Your opinion on Child Genius is likely to be much the same as your response to seeing an 11-year-old in a bowtie: it’s either cute or oddly sinister

The idea behind Child Genius (Channel 4, Monday-Saturday, 8pm), now in its fifth series, is to gather “gifted children” together from across the UK, deposit them into a highly-pressurised competition that puts their collective IQs through a wringer of advanced spelling tests (“C-H-U-R-R-I-G-U-R-E-S-Q-U-E”), ludicrously hard mental arithmetic and stupefyingly difficult memory tests, in order to find “Britain’s brightest child”. Now, whose bright idea was this?

Your opinion on Child Genius is likely to be much the same as your response to seeing an 11-year-old in a bowtie: it’s either cute or oddly sinister. Either way, it’s a safe bet to blame the parents.

Indeed, for all the time the programme spends in a wood-panelled cerebral arena, where towering quizmaster Richard Osman apologetically lobs bruising questions, it spends as long behind the scenes, scrutinising the family lives of its contestants.

In the first episode, the unabashedly besotted mother of one precocious boy, Claire, admits to her own immense competitiveness, “but not in a really pushy, psycho kind of way”. That would have sounded more reassuring if she hadn’t also sat the entrance exam for the programme, the first parent to insist, and if her son did not describe their relationship as being “one human being, kind of.” A boy’s best friend is his mother, as the non-pushy Norman Bates once put it.

The show asks for a complicated response from the viewer too. For most of us, our instinct towards children is to feel protective, and there’s nothing worse to see than the humiliation of a child whose brain freezes under pressure. (Osman, to his credit, is gently reassuring without being patronising. “Unlucky,” he’ll say, even if the question involves maths.)

But the show also presents exceptional children as strangely unsympathetic beings, like the perfectly groomed, preternaturally self-assured, mercurial son of an uncomfortably fawning mother. He is one of a set of twins, both competing, and their mother offers an assessment of their chances for the camera. “Michael has a strong chance of winning,” she says. “And Melissa… will do well.”

In some families competition is already heightened, and not, you suspect, without consequence.

Actually, Melissa, who opts to abandon the contest after one unhappy round, seems to be blessed with as much cop-on as intelligence, qualities that don’t always have the close relationship of fraternal twins. That’s why you may experience a twinge of concern for the gifted children here who experience emotional meltdowns when they get the answer wrong.

Or for the first-generation Britons, and kids from working-class families attending “selective” grammar school, who carry the weighty aspirations of their families on their slender shoulders.

There is much to marvel at, of course, like the abilities of children to learn words and phrases from Old English in the space of an hour, or the listed companies and share prices of the FTSE. But to hear one winner mispronounce the word “mortgage”, or repeatedly say “undescribably” to express his nervousness or relief, is to appreciate the difference between eidetic recall and experience.

That’s also why the future paths of child prodigies can be so unpredictable. It’s poignantly foreshadowed in the shape of a young girl once hailed as “Britain’s brainiest toddler”, at the age of two, apparently with an IQ greater than Einstein’s, who flames out of this competition early at grand old age of 11.

Looking back some years from now, what will she make of this competition; as keen to show its oblivious young brainiacs crowing backstage as its losers weeping in the arms of their parents? Dumb grown-ups, I guess.

Don’t sing so close to me: Choirs in the Covid era
8