Weekend TV guide: Seven of the best shows to watch

The maestros behind cinema’s great scores, plus the RTÉ CO on Dancing with the Stars 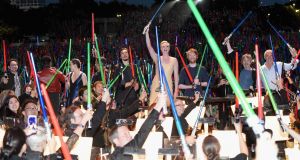 John Williams’s iconic Star Wars symphonic score gets a fresh workout by as the cast and film-makers of Star Wars: The Force Awakens join some 6,000 fans at a surprise concert in San Diego on July 10th, 2015. Photograph: Michael Buckner/Getty

The Late Late Show
Friday, RTÉ One, 9.35pm
While the controversy around the new National Children's Hospital rages, the vital work of saving lives continues in Irish children's hospitals every day. This week, The Late Late Show goes behind the scenes at Temple Street Children's Hospital to hear from children and families who have had life-saving treatments, and meet the doctors, nurses and staff who dedicate their lives to helping the most vulnerable of patients. Also: Champion jockey Ruby Walsh and his wife Gillian will talk about life at the top of the racing game, what drives him to succeed and why Gillian finds watching him race is a nerve-wracking experience. Plus: Designer Paul Costelloe on why top fashionistas still flock to his London Fashion Week shows and the reasons behind the political undertones of his latest collection; the return of the The Late Late Show Antiques Challenge for those willing to battle woodworm, rust and cobwebs in an attempt to bring life back to some unloved pieces; and music from hotly tipped Cork singer-songwriter David Keenan and  country music sensation Mike Denver.

Score: Cinema’s Greatest Soundtracks
Friday, BBC4, 9pm
What makes a great movie soundtrack? In this one-off documentary, elite Hollywood composers and movie-makers including Hans Zimmer (The Lion King, Gladiator), James Cameron (Titanic, Avatar), Danny Elfman (Edward Scissorhands, The Nightmare Before Christmas), John Williams (Star Wars, Jaws), Quincy Jones (In the Heat of the Night, The Italian Job) and Trent Reznor (The Social Network, Gone Girl) give a privileged look inside the creative challenges making a score match the tone of a film. They also explain how sound effects and music should compliment the dialogue of the movie, and vice versa.

Gogglebox
Friday, Channel 4, 9pm
The armchair critics are back for a 13th series – pretty impressive for a show that only started in 2013. It’s certainly been on air long enough to turn some of the regulars into celebrities in their own right, but will any of tonight’s contributors belatedly share their thoughts on Steph & Dom: Can Cannabis Save Our Son? or, to keep it more topical, former Goggleboxer Sandi Bogle in Famous and Fighting Crime?

The first run of the grime star’s chat and entertainment show apparently went down a treat with fans, because the English rapper also known as Tyrone Lindo is already back for a second series. Expect more big names to participate in these new episodes, which are also set to include musical performances, surprise collaborations and a variety of unexpected moments. Comedian Mo Gilligan is also back as co-host.

The Ray D’Arcy Show
Saturday, RTÉ One, 9.40pm
Dancing With the Stars' Demi Isaac Oviawe and dance partner Kai Widdrington will join Ray to talk about life after elimination, the backstage gossip and share their favourite moments. Demi reveals her post-Leaving Cert plans and how she’s looking for a date for her Debs! Also: Eamon Dunphy will be in to discuss the Republic of Ireland's new management set-up and our chances of qualifying for the Euros, his love for Liverpool FC and what's exercising him at the moment. Plus: Victor Bayda tells Ray on his remarkable journey from Moscow to Ireland, where he has been appointed Irish language officer in a south Kerry Gaeltacht; the parents of award-winning Swedish journalist Kim Wall, who was brutally murdered on a submarine in Denmark in 2017; and a live performance from the hit musical Jersey Boys ahead of its return to Dublin next month.

A rare opportunity to see Luke McManus’s Irish short film from 2012, starring Jim Norton as a pensioner who wants to impress his new lady friend (Deirdre Donnelly) by baking a cake – but finds a gang of feral teenage girls have other ideas.

Dancing with the Stars
Sunday, RTÉ One, 6.30pm
In this special edition of the toe-tapping contest, the RTE Concert Orchestra joins host Nicky Byrne and Jennifer Zamparelli.