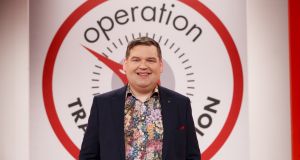 The latest series of RTÉ’s Operation Transformation drew to a close with this year’s team leaders discovering they had collectively lost nearly 10½ stone over the past eight weeks.

The grand finale saw each leader step on to the scales one for one final weigh-in before strutting their stuff on the catwalk in front of family and friends.

Paramedic Cathal Gallagher recorded the most significant weight loss of any of this year’s team leaders. The Donegal man, who agreed to participate in the series after his wife submitted an application on his behalf, lost 3st 10lb.

“I feel fantastic,” said Gallagher. “I think the highlight for me was starting to like myself again.”

“I am not sorry I did it but I’m happy it’s over,” joked Swayne.

A fifth team leader, Jean Tierney, was forced to pull out of the series in week six after discovering she was seven weeks pregnant. Last year, Tierney gave birth prematurely to a daughter named Sloane, who died five days after being born. Months later, another pregnancy ended in miscarriage.

As a result, Tierney was advised to stop following the diet and exercise programme. Despite her withdrawal from the show, the Limerick woman made a welcome appearance on last night’s show, dancing and flossing her way down the catwalk to The Riptide Movement’s All Works Out.

Kathryn Thomas paid tribute to Tierney and her boundless positivity in the face of personal tragedy.

“You have given hope and positivity to, not just couples who are trying to have a family, but to everybody who might have gone through something that was considered so unbearable that they might never find themselves again,” she said.

Now in its 12th season, Operation Transformation remains something of a phenomenon with people across the country following the programme’s meal plans religiously and participating in nationwide walks and runs. Just last weekend, 5,000 people descended on the Phoenix Park to take part in a 5km run with the team leaders.

This year, it created more than its fair share of watercooler moments, not least when Taoiseach Leo Varadkar was left crestfallen after discovering he had a “metabolic age” of 53. “I’d have to see the science behind the breakdown,” he replied.

There was behind-the-scenes drama when one contestant’s wife was captured on camera threatening to pull out of the show; Galentine’s Day giggles as Kathryn Thomas set up a Tinder profile for Siobhán; and childish sniggers when the show’s resident fitness guru Karl Henry instructed team leaders to “have even more sex than you had last week”.

Most valuable, however, was the show’s candid discussion of issues around mental health.

Contestant Paul Murphy garnered praise for speaking frankly on the show about the stress and burnout he felt as a self-employed businessman.

On tonight’s finale, he described the positive feedback he had received after opening up about his struggle to achieve a healthy work-life balance.

“Loads of people reached out after I did open up - people in business all over the country - to say how much it helped them,” he said. “I feel if can help someone else, it’s worth it.”

“Where do you turn?” he said at the time. “I’ve no-one to turn to. I’m supposed to be the strong one but sometimes you can be screaming inside.”

Fellow team leader Cathal Gallagher was similarly commended for speaking about his own experiences with depression to a group of students in Letterkenny IT, revealing how he had once contemplated taking his own life.

His message was simple: “If people are suffering from depression or anxiety, go and get help.”

Operation Transformation is a series that requires its leaders to be open and vulnerable. The willingness to bare one’s soul – whether that means donning Lycra in front of the whole country or telling the country you’re pregnant at seven weeks – is what keeps viewers hooked and invested.

While it may be now in its 11th year, viewers have demonstrated that neither their appetite for tales of redemption nor their desire for self-improvement has waned. Expect Operation Transformation to remain a fixture in the Irish television calendar for the foreseeable future.