Netflix: The 10 best new shows and films to watch in March

The official trailer for The Boy Who Harnessed The Wind, based on the true story of William Kamkwamba. Video: Netflix 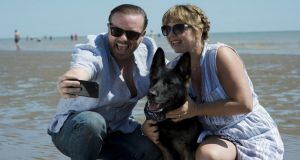 The Boy Who Harnessed the Wind

Written, directed and starring Chiwetel Ejiofor (12 Years a Slave) The Boy Who Harnessed the Wind, tells the inspiring true story of William Kamkwamba (Maxwell Simba) a young boy who uses his love of electronics to aid his community in famine-stricken Malawi by learning how to create a wind turbine.

Taking a break from goading strangers about being “snowflakes” on Twitter, Ricky Gervais has made a new sitcom. With his recent Netflix funded stand-up show not being the runaway success expected, he’s turned to what he does best. After Life is an exploration of grief, with Gervais playing widower Tony who has lost his wife Lisa (Kerry Godliman) to cancer. As a journalist with the local newspaper the Tambury Gazette, he pollutes his workplace with his nihilism and suicidal despair while trying to find some kind of meaning in his job writing stories about the kind of people who have found the face of Jesus in their cereal. His embittered hopelessness steering him away from his once kind nature.

The thin plot may just be another chance for the comedian to crow about his atheism but Gervais’ sermons are easier to stomach when they’re baked into his characters, the wistful comedy of After Life could prove to be a more palatable platform for his perpetual preaching.

Netflix are bursting with testosterone this month with the arrival of Triple Frontier, a ultra-masculine story of a group of unsung war heroes who organise a risky heist (is there any other kind?) in South America for a substantial pay-day. This swarthy, rag-tag bunch of misfits is made up of a bearded and furious Ben Affleck, a sweaty and sweary Oscar Isaacs accompanied by granite jawed youngsters Charlie Hunnam and Garrett Hedlund. A survivalist thriller, it sees the group pushed to breaking point as their loyalties and lives are challenged. Directed by J.C Chandor (A Most Violent Year) Triple Frontier harks back to those basic, bone-crunching dramas of the 1980s but with a slightly more sophisticated, gritty element.

After two seasons of saving lives and doing the most, the Queer Eye boys are back, bringing their unique brand of self-care to Kansas City, Missouri. With its empathetic stance and focus on optimism, positivity and self-acceptance Queer Eye became an uplifting beacon of hope in a time of grinding bleakness. Hopefully the unique magic of the Fab Five will be unaffected by their new status as fully fledged cultural icons. From skipping off to film in Japan, becoming magazine cover stars and attending high profile awards ceremonies their rise has been meteoric but even though they’re not in Kansas anymore, trust and believe they understand that there’s no place like home.

This highly anticipated adult animation anthology sees legendary director David Fincher (Zodiac, Seven) and Tim Miller (Deadpool) team up to offer bite-sized ruminations on light-hearted topics such as human nature, free will, racism, through an assortment of animation styles from 2D to photo-real 3D CGI. It’s a smorgasbord of science fiction, fantasy and horror with animators from around the world coming up with distinctive styles to capture the essence of each of the eighteen stories which have running times from five to fifteen minutes. An ambitious, exciting piece of work, the experimental Netflix original is sure to be one of the year’s most interesting projects.

Idris Elba is stretching his acting chops playing an erstwhile DJ and eternal bachelor in this new Netflix sitcom. Created by and starring Elba as Charlie the struggling DJ who is constantly one gig away from success, it sees his uncomplicated life turned upside down when he is tasked with becoming a “manny” to his famous friend’s wild-child daughter. Co-starring Piper Perabo (Coyote Ugly) as Sara a superstar DJ who wants to give her daughter a new life in London, it follows the challenges of modern parenthood in a culture where no-one is encouraged to grow up.

Netflix latest docu-drama is a look at some of LA’s most ruthless estate agents at the elite Oppenheim Group who sell the American Dream of the luxurious Los Angeles life to their uber-wealthy clients.

Telling the story of the horrific and fatal gang rape of a young girl in Delhi in 2012, this fact-based procedural drama tracks the investigation in painstaking detail following the efforts of the Delhi police force who worked tirelessly to apprehend the group responsible and bring them to justice.

Starring Shefali Shah (Monsoon Wedding) as the female lead investigator, it’s a sobering, uncomfortable but thought provoking watch about how the shocking brutality experienced by this woman echoed around the world.

As proved by the award-winning but divisive wig and teeth drama, Bohemian Rhapsody, rock biopics are a challenging genre, the more beloved the band, the higher the stakes. Netflix are testing this theory by taking one of the greatest rock memoirs ever committed to print and transforming it into a film. Motley Crue’s biography The Dirt is an unflinching look at the notorious hair-rockers debauched life on the road. It’s a tale of excess, addiction, ego and insanity. Mixed in amongst the eye-watering anecdotes are real moments of tragedy told in an endearingly frank and honest way.

The film, starring musician Machine Gun Kelly as hell-raising heartthrob Tommy Lee and baby-faced Brit actor Douglas Booth as the indestructible Nikki Sixx seems to be more of a fun, goofy thrill-ride through the glam-metallers greatest hits. A Bill and Ted meets Spinal Tap trashy pleasure, the film may not be elevated into the rock biopic hall of fame but has all the makings of a cult classic.

Directed by John Lee Hancock (The Blind Side) The Highwaymen is a Depression-era drama that follows the detectives who were tasked with hunting down the infamous Bonnie and Clyde. Starring a suitably gruff and grizzly Kevin Costner and Woody Harrelson as the former Texas rangers, it’s the flip-side to the 1967 Arthur Penn classic showing how old-fashioned police work eventually managed to outsmart the outlaw couple.