This Time With Alan Partridge: A wicked study in prejudice and panic

‘Guess who’s back in the big time?’ he gloats in hilarious first episode of new show 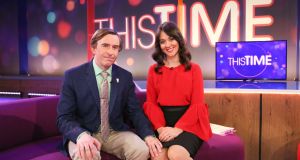 When he punched the chief commissioning editor of the BBC live on air during a 1995 Christmas special, with his fist stuck inside a turkey like a raw meat boxing glove, Alan Partridge was assured he would never work in broadcast television again.

And, on that bombshell, the career of this hopeless sports commentator turned hopeless talk show host split into two parallel realities. In one, Partridge, a man with all the social philosophy of Jeremy Clarkson and twice the self-regard, was banished into the wilderness of terrible television pitches and unenviable time slots presenting North Norfolk Digital radio.

In the other, Steve Coogan’s most famous comic creation somehow became deeper and funnier, his mortifyingly obvious needs and inadequacies exposed in the sitcom I’m Alan Partridge; his greying temples and stumbling mind becoming the focus of the fly-on-the-wall experiment of Mid Morning Matters.

Bring these two realities together and you somehow get the biggest screw-up in media to have ever had several successful shows, two best selling books and a hit movie. Alan Partridge has made a huge success out of failure.

Partridge is now so well realised, across so many years and manifestations, that it’s a wonder the character has not somehow become self-aware

Understandably, his return to diegetic television, after nearly a quarter of a century, in This Time With Alan Partridge (BBC One, Monday, 9.30pm) comes without fanfare or “a-ha”. The title sequences of This Time, an evening magazine programme so undemanding it makes The One Show look like a theoretical physics exam, doesn’t even include him, a last minute stand in for a host who has taken ill.

“Sorry,” he tells co-host Jennie (Susannah Fielding) after a babbling on-air digression about hand cream, “I’ve never been in HD before.”

This raises an obvious question: have the times conspired to make Alan himself seem sharper? A lot has been made recently about the significance of his return – and his dim-witted, small-minded, middle-England views – at a time when Britain prepares for Brexit with all the grace, composure and finesse of a typical Alan Partridge broadcast.

British comedy has long traded in the riches of embarrassment, the exquisite mortification that comes with making a fool out of yourself in public. That may make Alan, the proto-Leaver, seem like the man of the moment.

His politics are not as conspicuous as the inner-workings of his mind, though, in the first, hilarious episode of the new show, written by Coogan and brothers Neil and Rob Gibbons (who first revivified Partridge 10 years ago). Seeing Alan through a prism of camera shots, on air and off, with the god-like voyeurism of the TV control room, we even get throwaway jokes that work as a wicked study in prejudice and panic.

Rarely do you get such a penetrating window into the workings of someone’s mind to discover so touchingly little there.

Partridge is now so well realised, across so many years and manifestations, that it’s a wonder the character has not somehow become self-aware. (Then again, how self-aware could a man be who explains the diminishing effects of antibiotics with the analogy of giving chocolates to calm an angry spouse? “By the 20th time, the chocolates have little-to-no potency and can even inflame the problem.”)

Partridge, gloriously and transparently self-involved, may have barely noticed.

Not even his hacked emails (“Guess who’s back in the big time?” he gloats to Richard Hammond) are as exposing as the man himself: “Do you think Paul McCartney is watching this?” he airily asks Lynn. Why not?

In these days of accidental Partridge, where the blind are leading the blind with as much stumbling self-assurance, Macca could do a lot worse.