Dismiss the show as a bonkfest if you want, but don’t underestimate its potent message

Love Island's Maura Higgins shuts down fellow contestant Tom Walker after over hearing comments he made about her. Video: Virgin Media 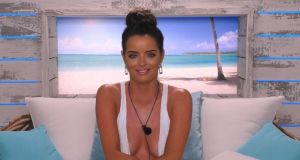 Maura Higgins on Love Island: a woman making the first move has sent Twitter into a does-not-compute meltdown

To the untrained eye, Love Island – which this year has starred two Irish women for the first time – looks and sounds like the Gaeltacht with cutaway swimsuits. The J-1 experience cross-bred with Club Tropicana. A PrettyLittleThing advert with dialogue. An Abercrombie & Fitch poster with moving parts.

Yet even in among the interchangeable beauties, the acres of glistening flesh and the come-hither stares, Love Island is saying more about gender relations, toxic masculinity, consent and sexuality than several other TV shows put together.

Dismiss it as a lowest-common-denominator bonkfest all you want, but the ITV series has become a Trojan horse for its Gen-Z and millennial audience into some pretty important conversations.

Until a fortnight ago women were the coquettish givers of sex, men the takers. And then a Longford lass arrived and, with a few choice moments, blew it all out of the water

For the uninitiated, a quick intro: the objective of this reality show for its cast, who are holed up in a sumptuous Majorcan villa, is to couple up with a fellow Islander post-haste. Its Irish contestants this year were Yewande Biala – since booted out, sadly – and Maura Higgins, who has made quite the impression.

Snogging, or even snogging with benefits, is entirely optional (although the latter is likely to score you a few thousand extra Instafollowers). The most compatible, loved-up couple will be in line for a £50,000 prize, which they can split with their plus-one or keep to themselves. Yet if both parties choose love over money they leave empty-handed. Of course they never do, as they’re invariably – huge air quotes here – genuinely loved up.

But the course of true love and postshow fame doesn’t run smoothly. It all goes a bit sexy musical chairs from time to time, especially when a bombshell enters the villa.

Until a fortnight ago the gender roles on Love Island were pretty cleanly delineated, just as they often are in dating in general. The men were the pursuers, women the pursued. Women were the coquettish givers of sex, men the takers. And, by that reckoning, women don’t enjoy sex quite as much as men do.

And then a Longford lass arrived and, with a few choice moments, blew it all out of the water. Whether Maura is on the lookout for love, hell-bent on parlaying infamy into a postseries career or just a bit thirsty is anyone’s guess. But the ring girl wasted no time in setting her sights on Tommy Fury, a boxer, to the consternation of Molly-Mae Hague, with whom he had already coupled up.

The reality-TV gods must have praised the heavens when Maura declared as her opening gambit: “The things I’d do to him.” She could hear herself screaming his name, she admitted. He gave her the “fanny flutters”. “I wish he was eating me,” she added decisively, in case anyone was left in any doubt about her intentions.

Tommy’s head did a “560-degree turn” (quite the feat, even in the circumstances), and he admitted to climaxing on sight of the Irish beauty. In the end he stayed faithful to Molly-Mae, even politely declining Maura’s enthusiastic advances. It’s worth noting that Tommy previously admitted he would very much kiss her if the opportunity were to arise.

Yet a woman making the first move appears to have sent many on Twitter into a does-not-compute meltdown. When it comes to a man’s thirst and that of a woman, never the twain shall meet.

Fans called for Maura, a “sexual predator”, to be axed from the show. Never mind that the entire objective is to snag a mate, subtlety be damned.

Yet, taking the rejection on the chin, Maura coupled up with a newbie, Tom Walker. He’s not to be confused with Tommy, although they do look rather similar, in fairness.

It appears to be the first time it has occurred to people that just because a woman talks freely and comfortably about sex, that just because she’s partial to a bit of innuendo, it doesn’t mean she owes anything to anyone

Anyway. Poised to be asked into the Hideaway for an overnight stay with Maura, Tom retreated to the huddle of hunks, where it all went a bit Summer Nights in Grease. Seemingly confident that he was about to score, he was curious to see whether Maura – sexually confident, gregarious, alpha Maura – was “all mouth or not”. Seemingly, being sexually comfortable, or even expressing any sort of desire, makes a woman game for just about anything, with anyone. That Tom breezily repeated the comment to Maura’s face – “They were saying, ‘You’re gonna get eaten alive’” – suggested he felt there was nothing out of the ordinary about it.

On getting wind of Tom’s juvenile, cocky comment, Maura, reasonably, showed him the door (using rather more demonstrative language than that).

It appears to be the first time the following has occurred to people: that just because a woman talks freely and comfortably about sex, that just because she’s partial to a bit of innuendo, it doesn’t mean she owes anything to anyone. The “all- mouthers” aren’t obliged to prove their point by following it up with action.

Tom’s personality prolapse was complete a day later, when he, to use the vernacular, totally showed his arse.

In true beta-male fashion, Tom put Maura’s assertiveness down to being a bit extra. “She’s too loud, attention-seeking and a bit cringe,” he said, but not before kissing and making up with her.

If you’re a confident woman with a dating life, you will surely know the drill by now: to these Milquetoasts, who like their girls “ladylike” – read: pliable – it’s not them. It’s never them. It’s you.

She has barely been in the villa a wet fortnight, but Maura has already given toxic masculinity a perfectly manicured two fingers.

Amid the sun-drenched horseplay and the banter, and the copious footage of women using their GHDs, Love Island should be hailed for offering its young audience as potent and pertinent as message as that.