The Great Hack: The story of Cambridge Analytica, Trump and Brexit

Review: The Netflix documentary has many villains, few heroes and needs a through line 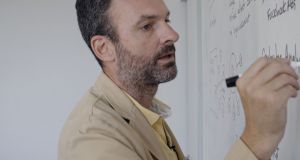 Netflix’s data-hacking documentary has hit our screens the week Boris Johnson gains the keys to 10 Downing Street. It seems unlikely that the streaming giant could have planned it that way. The timing is nonetheless perfect.

Just as Brexit greased Johnson’s path to the highest office in British politics, so it has forced us to confront the dark art of voter manipulation and exploitation of personal data that led a slender majority in the UK to vote to leave the European Union.

The Cambridge Analytica scandal, as laid out here, is at once straightforward and supremely nebulous. The idiot’s guide is that shadowy trailblazers on the right hijacked Facebook and used it to target wavering voters. These “persuadables” were regarded as suitably malleable and, micro-targeted with inflammatory propaganda, were duly tilted towards voting to leave. And from there flows all our present woes.

Stupendously successful in the Brexit referendum, the tactic was repeated in the 2016 US presidential election. By focusing on a mere 45,000 voters in a handful of swing states, Cambridge Analytica nudged the result in Trump’s favour. Political opinions were being reprogrammed and neither the targeted voters nor the rest of us had any inkling what was going on.

But the nuts and bolts of how Cambridge Analytica accomplished all this are spectacularly murky, and here directors Karim Amer and Jehane Noujaim stumble. Prominent Brexiteer Arron Banks has threatened to sue Netflix over the Great Hack’s “false and defamatory” allegations – though he is not singled out by name.

This is a story with many villains and few heroes. The film-makers struggle to identify a narrative through line. Instead, they hop between the perspectives of New York digital rights campaigner David Carroll, Guardian journalist Carole Cadwalladr and Cambridge Analytica whistleblower Brittany Kaiser.

Carroll took Cambridge Analytica to court in an ultimately fruitless attempt to reclaim the information it had collected about him without his knowledge or permission. He speaks urgently about the threats posed to privacy and our basic right to live as private citizens by the industrial-scale aggregation of our online habits. By the time his children are grown up, he explains, their entire lives will have been dissected and drilled into by Big Data.

Cadwalladr is the crusading journalist of the piece. She stumbled upon the data-hacking story after taking an exploratory lunch with a loose-lipped member of Leave UK. He laid it all out for her. She sat there with her jaw slowly unspooling.

“Living with this disinformation propaganda every single day… it does work,” she says. “It does have an impact on real life, whether people believe it or not.”

Which brings us to Kaiser. A once idealistic intern at the Obama White House, she had been lured across the ideological divide by clubbable Cambridge Analytica chief executive Gareth Nix (Eton-educated and the scion of a dynasty of investment bankers). Seduced by the dark side, she joined the NRA, began to dress more conservatively and appeared on a Leave UK platform in the run up to the Brexit referendum.

But she later recanted, turning whistle blower against her former employers. Now in self-imposed exile in Thailand, she parades her remorse. Yet her motives are ultimately difficult to read. She certainly does not come across as the shining heroine of the saga.