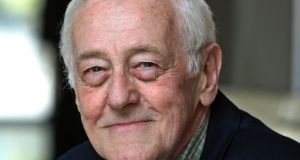 John Mahoney, one of the stars of the hit TV series Frasier, has died aged 77. He is best known for playing Martin Crane in the series, father to Kelsey Grammer’s Frasier Crane, but in Ireland he is remembered fondly for his frequent performances at the Galway International Arts Festival.

Mahoney died in a Chicago hospice on Sunday.

Frasier, a spinoff of Cheers, ran for 13 seasons from 1993 to 2004. Mahoney’s portrayal of Marty earned him two Emmy nominations, two Golden Globe nominations and a Screen Actors Guild award.

Born in Blackpool, England, in 1940 to a family evacuated from wartime Manchester, he was the seventh of eight children. His father was a baker from Cork who emigrated to the UK. Mahoney did some acting at school and was offered a placement with a Birmingham theatre at the age of 18. Instead he decided to cross the Atlantic to join his sister Vera, a GI bride who had fetched up on a farm in Illinois.

Mahoney made Chicago his adopted hometown. A former professor of English, he was writing for a medical journal and at the age of 37 turned to acting. He began in theatre in the 1970s, joining Steppenwolf Theatre at the suggestion of actor John Malkovich, eventually winning a Tony Award for his performance in John Guare’s The House of Blue Leaves in 1986.

He was proud of his Irish roots, says Paul Fahy, his friend, and artistic director of the Galway International Arts Festival but he recalls Mahoney telling him once how “when he moved to the US he made a conscious decision: this is it, he would become an American, and within six months he developed an accent!”

Mahoney performed at the Galway arts festival in many plays, and forged a strong relationship with the city, the arts festival, and Irish audiences. He first visited in 2000 when Chicago’s Irish Rep Company brought Eugene O’Neill’s Long Day’s Journey Into Night to the festival. Mahoney later said of this: “performing it there was one of the highlights of my career, genuinely”.

Fahy said the festival today mourned a friend: “We are so sad to hear of the death of our dear friend John Mahoney. He performed so many memorable roles at the festival and often holidayed in Galway. A truly brilliant actor. What a wonderful, sweet and gentle man he was. We loved him dearly. He was a total joy to work with. We will miss him very much.”

As well as his many festival performances, he came over privately many times to visit Galway and Connemara, almost always in the winter months. “He would hop on a tourist bus and go to Connemara or the Cliffs of Moher, or we’d go for a spin in my car,” said Fahyy.

He has a large extended family, and Fahy recalls how they would arrive in Galway from the north of England “en masse, nephews, nieces, his older brother”, for an opening or the last night of a show, and stay for a few days.

Mahoney told the Galway Advertiser in an interview: “I remember flying in to Dublin, seeing a show in the Abbey, driving across to Galway and then spending nearly a month driving all over Ireland and by the time that month was over I felt totally, utterly, Irish and have ever since.”

The festival quotes an interview with him: “I met Paul [Fahy] the first time I came over and we struck up a friendship that goes beyond the theatre. I’m not just saying this to blow smoke up you, but my two favourite places in the world are Galway and Chicago.”

In 2012 he performed Bruce Graham’s play The Outgoing Tide at the festival, a three-hander written especially for him. It was probably his most memorable, says Fahy. The play was about an older man with Alzheimer’s making decuisions about the last stage of his life.

Irish Times journalist Arminta Wallace met him in the city, observing “I see the Frasier effect at work in the lobby of the Meyrick Hotel in Galway, where a group of guests around a table, chatting and sharing a lunchtime glass of wine, suddenly fall silent as they realise who is standing beside them. You can see the penny drop as their faces change. One minute they’re ignoring the tidy American tourist in the plaid shirt, the next they’re going, ‘OMG, it’s Martin Crane from Frasier’. You can practically see them glance behind him, looking for the dog, the cane and the tatty reclining armchair.”

Mahoney performed in Chapatti by Christian O’Reilly, the festival’s co-production with Chicago’s Northlight Theatre, which premiered in Galway in 2014; it was Mahoney’s fifth time at the Galway festival. Set in Dublin, it offers an image of Ireland through American eyes, “not as an egregious cartoon, mercifully, but as a story muddled by unrecognisable accents and generic compromises” wrote Irish Times theatre critic Peter Crawley.

While was best known for his performances in Frasier and films such as Moonlight, but “he was a true man of the theatre”, says Fahy. “He loved writers and directors. He was also loyal to theatre crew – he was a nice guy and had great respect for them.”

He had favourite stage manager he liked to work with, Laura D Glenn – “he wouldn’t do anything without her. He was very loyal and created strong partnerships with people”. As well as Steppenwolf, he worked a lot with Northlight theatre company in the past decade.

Mahoney made his feature film debut in Tin Men in 1987, later appearing in films including In the Line of Fire, Reality Bites, Say Anything, The American President and Primal Fear. He was also a frequent voice actor, including voicing characters in the 1998 animated film Antz, Atlantis: The Lost Empire and an episode of the Simpsons.

In all, he performed at Galway arts festival six times and was he was honorary patron of the festival for a number of years. Fahy saw him in November 2017 in his last performance, in The Rembrandt with Steppenwolf, and last spoke to him before Christmas. He had watched Moonlight again on TV, “and I was slagging him about that. He was in great form, and was still well”.

Steppenwolf cancelled its show on Monday in Chicago and instead hosted a tribute event in his memory.

Gwen O’Sullivan, who worked with him at Galway International Arts Festival, said: “Very sad to hear about the passing of this lovely man. I had the absolute pleasure of working with him during 3 Arts Festival theatre productions he starred in. A complete sweetheart, total pro and great fun to be around. Hope the stars are shining bright for you tonight in Chicago, John Mahoney X.”

Actor Kate O’Toole wrote: “Farewell to a fine actor. Some years ago in Galway I went to see John Mahoney in the Good Father, at Druid. A lovely, strong performance that stays with me still, he could hold the audience in the palm of his hand. From the sublime to the deliciously ridiculous, on the set of Frasier his face was daubed with sardine oil when the dog had to jump up & lick him affectionately. RIP.”

Professor of theatre at NUIG Patrick Lonergan posted: “Very sorry to hear about the death of John Mahoney. Met him once at a @GalwayIntArts talkback with @NorthlightThtr. Very generous and insightful: took his acting so seriously but wore his talents lightly.”

Mahoney never married and did not have children. – Additional reporting: agencies

Why Didn’t You Just Do What You Were Told?: A superb collection
5