If Kylie Jenner can stay off social media, why can’t I?

Jennifer O’Connell: Will people follow in Jenner’s footsteps and reduce their online presence? 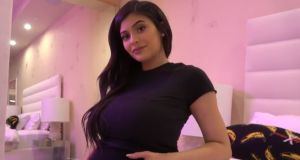 Kylie was a mere 10 years old when she exploded into public consciousness, dancing around a stripper pole

The US reality-TV star and youngest of the “Kardashian siblings”, Kylie Jenner, has confirmed the birth of her first child. The birth notice took the form of a 12-minute YouTube video entitled To Our Daughter, and it it comes complete with tear-jerking sonogram appointments, miniature Nike Airs and a live streaming of the birth and an allusion from Kim Kardashian on the post-birth status of her vagina.

With Kardashians dropping baby announcements like hang sangwidges at an Irish wake, this is hardly shock news. Even if you don’t actively follow the Kardashians, you’re probably aware that they have been busy ensuring their repopulation rate is sufficient to allow Keeping Up With The Kardashians to run for at least another 70 or 80 seasons.

There they are, naming one child after a wind direction (North West), and instantly launching the tabloid countdown to another’s first arrest by calling him “Saint”. There they are, clad in matching silk pyjamas at yet another baby shower. There they are, having a baby via a surrogate. There they are, sporting matching bumps and G-strings and . . . You get the picture.

What makes this baby announcement somewhat unusual is that the 20-year-old enfant terrible of the Kardashian clan got through the entire nine months of her pregnancy without ever actually confirming the fact that she was expecting a child, to her 102 million Instagram followers. Not only that, she largely “went dark” on social media since last September, staying away from Instagram and Snapchat.

The idea of an Instagram without one of the Kardashian sisters is like Walnut Whips without the walnut, U2 without Bono, or Trump without fake tan. For a while, it seemed that, like the apocryphal tree falling in the forest, it wasn’t certain whether a Kardashian born out of sight of social media could really be said to have been born at all. As an entity, they seem to exist only in the glow of the hundreds of millions of phone screens tracking their every move.

A brief history lesson for the uninitiated: for over a decade, the Kardashian-Jenners – dubbed the KarJenners by the US media – have raked in hundreds of millions of dollars by dripfeeding hourly updates to their fans, who hang on to their every hashtag like opiate addicts craving a fix.

Kylie was a mere 10 years old when she exploded into public consciousness, dancing around a stripper pole. Her childhood was actually not a childhood, in any conventional sense of the term. By the time she turned 18, she had posted the obligatory racy shots on Instagram, had lip injections, been the face of various clothing and cosmetics brands, crashed her $125,000 Mercedes, bought her own $2.7 million mansion and had in a relationship with a 25-year-old rapper, who reportedly left his wife and child for her. As you do.

And, of course, she posted and Snapchatted her way through it all – snapping about once an hour and uploading an average of around 11 Instagram photos a day.

Until September last year, when she had her pregnancy confirmed and decided to take a break until after her child was born. (Clearly, this is the Kardashians, so “taking a break” still allowed for the posting of regular face-only selfies and promotional shots for her eponymous make-up line.)

There are two schools of thought on why this might be. The first is based on the premise that, Kylie is the true heir to the Kardashian crown and a master manipulator of public attention. By withdrawing the supply of updates, she always intended to let speculation reach fever pitch before the big reveal – in this case, the YouTube video, which has already racked up over 24 million views.

The second takes her at her word – it goes that, having spent her entire short life in the spotlight, she simply wanted a break from social media for the sake of her health and stress levels. “Kylie wants to disappear and be out of the spotlight and focus on her health and happiness,” a source was quoted saying to People magazine last year.

“I’m sorry for keeping you in the dark through all the assumptions. I understand you’re used to me bringing you along on all my journeys. My pregnancy was one I chose not to do in front of the world. I knew for myself I needed to prepare for this role of a lifetime in the most positive, stress free and healthy way I knew how,” she wrote in a post on Instagram on Sunday.

“There was no gotcha moment, no big paid reveal I had planned. I knew my baby would feel every stress and every emotion, so I chose to do it this way for my little life and our happiness.”

So could this be the start of a trend for people to scale back their social media habits? Or at least to moderate their social-media habits when their stress levels demand it, or where pregnancy, parenting and other major life moments are concerned?

There is a sense, at least anecdotal, that we may be reaching a saturation point, with growing numbers of people craving a life away from the tyranny of their devices.

The economist David McWilliams wrote recently in this newspaper about his own decision to stop using an iPhone, describing life without constant emails, Twitter feeds, Facebook updates and Instagram photos as “a blessed relief. It feels like you are back in control of your own time and not constantly being tugged by some inanimate force at all times of day and night”.

Celebrities who have cried off social media for various lengths of time include Meghan Markle (though her impending accession to the Royal family is the most likely reason), Stephen Fry, Kanye West and Ed Sheeran, who is back after a hiatus, but who claims that he now only posts and doesn’t read comments to avoid absorbing the negativity.

I recently started tracking my own social media use as part of some a documentary on stress I’m involved in, and discovered to my horror that I’m regularly wasting about 2.5 hours a day on Twitter – that’s time I could be spending with my children or husband, exercising, reading or writing books, learning a foreign language – all those things I frequently insist that I never have enough time for. I’m not planning a full flounce, but I’m certainly rethinking my habits.

There is a growing body of research to show that our dependence on social media leads to increased stress and anxiety levels, and shortening attention spans. A study from the Journal of Depression and Anxiety found that the longer young adults spend on social media, the more likely they are to be depressed because of the false lives they create and curate online.

A recent study in the Journal of the Academy of Nutrition and Dietetics found found young adults who spent the most time on visual social media platforms such as Instagram had more than twice the risk of eating and body image concerns.

So are the generation now becoming parents for the first time – digital natives, who can probably hardly barely remember a time before Siri – going to be prompted by Kylie Jenner to follow in her footsteps and choose to strategically scale back their online presence at times in their lives, saving their most signifcant moments for themselves and close friends and families?

Frankly, it seems unlikely. A recent survey by ChannelMum of 1,435 mothers found that three in four parents-to-be are no longer even waiting until the 12-week mark to share their news. Half are announcing their pregnancies at seven weeks, and many are choosing to share their news on social media with a scan photo.

Facebook baby scan photos aren’t going anywhere just yet. But maybe it’s time we all considered whether this is really how we want to spend ever-increasing chunks of our lives – according to Statista, the average internet user spent 135 minutes on social media in 2017, up nine minutes on the previous year and a full 45 minutes more than in 2012.

If a Kardashian can manage to stay off social media, why can’t the rest of us?