Podcast of the week: a human take on life behind bars 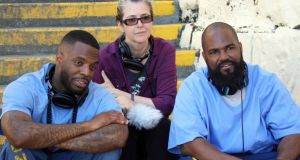 Due to the scrappy, mobile nature of the podcast as a form, it allows us as listeners to eavesdrop on parts of the world we may never encounter. In theory, anyone with access to a microphone and a computer with an internet connection can make and record a podcast. This series allows us access into a locked-down space: it is recorded in association with Radiotopia in San Quentin State Prison. It is a collaborative project recorded in the prison’s media lab by inmates Antwan Williams and Earlonne Woods, and facilitated by artist and professor of photography at California State University Nigel Poor.

This first episode offers a close look at an intimate and important part of incarceration – who you share your cell with. Earlonne and Nigel take the reins in this episode, and have a bright rapport. Nigel is never patronising – though she is an other in this space, a white woman entering a largely black, male environment, – and comes across as curious and lively. Earlonne as a co-host is warm, and earnest in his discussion of life in and around prison. As an unlikely duo, they make for captivating listening.

It is almost impossible not to feel empathetic to the inmates as details of the daily structure of living in a cell emerge – the potential for 24-hour intimidation or worse, violence. Alternately, there is potential for camaraderie and support, given that many of the interviewees are serving 20- or 30-year sentences. Nigel at one point mentions to Earlonne that she has seen closets larger than the cells they live in. The stories of sharing such an enclosed, private space with another inmate are not always bleak or dour, but rather, human.

Part of what makes this form so powerful is the thrum of prison life in the background, the occasional flares of laughter and hope – and also how unflinching they are in examining racial segregation within the system. For example, there is a brief interview with an inmate who is Native American, and therefore falls outside the racial brackets of cellmate pairing.

The second episode examines the process by which gang culture indoctrinates young men in a single longform interview with an inmate, analysing the societal traps in play for young men of colour in America. Episode three takes a look at an inmate who is very different from all the others. Later, the series looks at the dehumanization of solitary confinement.

Podcasts like this grant a new, more human angle on a space that most people may never enter, a place that is largely reduced to a venue without nuance: prison, a place where criminals go to be punished. The reality inside is that people remain people, and hopefully ultimately re-enter society in some way rehabilitated.

In some way, it is clear that the creation of this show is a form of rehabilitation for Earlonne and Antwan, an outlet for expression – a place wherein they become more than the sum of the crime they committed. This podcast is an intimate, humanising thing: a terrific listen that contextualises the prison industrial complex in America.

Book Ambassadors: What our envoys abroad are reading this summer
10