Dancing with the Stars: Maia Dunphy shock exit puts judges in the dock

Broadcaster Maia Dunphy has been voted off RTE's 'Dancing With The Stars' . She is the third celebrity to be eliminated from the show. Video: RTE 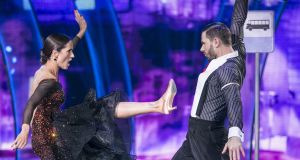 Five weeks into Dancing with the Stars and the judges appear to be accepting mediocrity from certain dancers far too easily and the elimination of journalist and broadcaster Maia Dunphy, who has been getting better and better each week, proves that progress can only get you so far.

Her swan dance was the tango and what a way to go, with the judges rewarding the performance with 19 points. But this was not enough for the public and while she leaves with style, we are left behind with some serious slump.

“Your heart is in it” has to be the dancing equivalent of “he has a nice personality” and that’s what the judges have to say for GAA broadcaster Marty Morrissey. Looking to his partner Ksenia Zsikhotska throughout his Charleston for guidance, he’s seriously lagging behind and the judges seem grand with that. Scoring 12 points, he’s scraping the bottom of the leaderboard – again – but remains untouchable.

But where they cut Morrissey slack, they go hard on comedian and actress Deirdre O’Kane. Scoring 19, you can smell her disappointment all the way from Ardmore Studios. Perhaps she’s reading too much between the judges’ critiques but it’s obvious that she wants to be praised for more than her “good effort”; she wants to win.

But with Olympic race walker Robert Heffernan and Emily Barker’s Viennese waltz, the judges didn’t hold back. “Tonight . . . you were the dance,” Lorraine Barry says sagely. “Tonight was your night,” hyperboles Julian Benson. “Close to perfect,” shrugs Brian Redmond. And they put the points where their mouths are and give them 25 points.

Topping the leaderboard tonight with 27 points is pop singer Jake Carter and his partner Karen Byrne. Although the judges are swooning with praise for their contemporary ballroom, Carter fades into the background when he’s in a show that’s brimming with personalities and one star with a far more impressive sibling than his own. A dark horse, it’s hard to know how far he’ll go but those words might be fit to eat by the time the final rolls around.

Thanks to the eliminations of Tomás O’Leary and Norah Casey and last year’s Des Bishop, the paso doble is now known as the Cursed Paso Doble in DWTS land but with 22 points, GAA star Anna Geary and Kai Widdrington put that curse to rest.

Despite a rib injury, where she was advised by a doctor to take three days of rest, the show goes on for model Alannah Beirne. Getting through on painkillers, she and Vitali Kozmin cha chas along to Timber and the judges, totally unfazed by the performance, give them 23 points.

Even though 2FM presenter Bernard O’Shea scored a low 14 points for his America Smooth, he presents us with new and intriguing TV opportunity. Barry offered to stretch out his spine in rehearsals this week and that’s where our tax money should be going; Physio with the Stars.

In another TV opportunity, fitness instructor Erin McGregor knows how to pull the audience’s heartstrings. In order to work some extra softness into her foxtrot, she thinks of her children. “If you don’t have family, what do you have?” she says, sounding like an outtake from Keeping Up with the Kardashians but with brother Conor in the audience, it’s more like Keeping Up with the McGregors. She and her partner Ryan McShane score 24 points.

As it’s the first weekend in February, the grand stretches in the evening are reminding us that there’s life outside. While Geary, McGregor, Beirne, O’Kane and O’Shea bring flair and sheer entertainment to the show, the judges are letting the others away with average performances.  They’ll have to come in harder if they want to keep us indoors for the next seven Sundays.