Episode 1: Like the Six Nations, the show’s highlight comes in its final moments

82-year-old great-grandmother Evelyn Williams from Tallaght in Dublin stunned the judges with her singing on the opening night of TV3's 'Ireland's Got Talent' show. Video: TV3 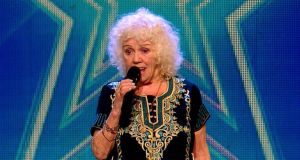 She's got talent: Evelyn Williams from Tallaght is the true queen of the night. Photograph: TV3 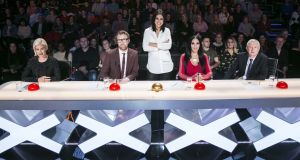 The heat is on. The entire country is waiting with bated breath. We’re under pressure not just to perform in a typically mediocre manner but to truly triumph. No it’s not the Six Nations but something far more important, it’s the inaugural episode of Ireland’s Got Talent.

Ireland’s Got Talent is our chance to prove to our neighbours – nay, the world – that we also have our share of haunting child choirs that could crumble a stone heart, superior spoon-playing auldfellas and troupes of Riverdancing dogs primed and ready to perform their national duty when called upon.

It’s a variety show that’s a bit like a selection box of those random Late Late Show party pieces, the jazz-hands and familiar glamour of Tops of the Town given a millennial glow-up.

As the judges go through their CVs in the introductory VTs – from Drag Race diva Michelle Visage, Big Breakfast babe Denise Van Outen to our own lil’ Judge Judy, Louis Walsh – comedian Jason Byrne sums up the appeal of the show as soon as he appears on screen “ Irish people love to be judging people”.

Byrne adds the necessary Irish flavour to the line-up with his colloquialisms about chippers and liberal use of “deadly” as a compliment, quipping that he knew dancers from “Swords and Ballinteer” when Van Outen boasted about her time working with choreographers in LA.  His cheeky, good-natured summations cut through the now predictable patter of the talent show critique.

The show zooms off to a flashy start with silver-jacketed hun-bunned dancer Zacc Milne from Finglas, who slays the stage slicing through Beyonce’s Formation with a series of razor-sharp, hair-whipping moves, like he just slid off the runway in Paris is Burning. Earning a standing ovation and glowing praise from the visibly impressed Visage, his modern, fun performance makes it abundantly clear how far we’ve come from the Billie Barry roly-polys of yore.

It’s an auspicious overwhelmingly positive beginning that continues with the success of dance crews Afterlife (who mix street style with Irish dancing) and XDG who twirl around the stage to I Will Survive with the judges and the audience wailing in time. It’s a bit like the drunken afters of an Irish wedding just before it tips out of control.

This eager run of approvals puts the show in stark contrast with its UK contemporaries. The emphasis is more on constructive criticism and light-hearted wisecracks rather than on the gloom and spitefulness of Cowell’s incarnation. Even when the panel decide against an act they dispense advice with a humane kindness – the villainous reality-TV hatchet job is hopefully a thing of the past.

It would have been easy for them to have poured scorn and heaped rehearsed put-downs on poor Donna, a cheery soul whose act consisted of her singing songs while pulling various props out from a steamer-trunk. As the buzzers honked, Jason Byrne was the last to decide, his curious face contorted into an amused grimace, until Louis Walsh took it upon himself to prematurely end her turn by pressing Jason’s buzzer.

For those playing talent show bingo there were the usual assortment of “zany” variety acts, like the dancing lads with tricolour towels covering their modesty as they jigged about, shyly giggling at their own jiggling pale flesh, a choreographed stag-night prank.

Then there was hip-wriggling 79-year-old Pat Glynn who belted out Blueberry Hill to the delight of Louis Walsh, and the spoon-playing (Bingo!) Tommy, who failed to progress to the next round but did get Jason Byrne hopping around the stage to Denise Van Outen’s own spoon-accompaniment.

There may not have been dancing dogs (yet) but there was an ex-bouncy castle salesman turned comedian Sean Hegarty who charmed crowd and judges with an awful selection of Christmas-cracker jokes accompanied by David O’Doherty-style toy keyboard tinkling. It may have been sheer exhaustion or just the novelty of audience participation but Hegarty was the surprise hit of the night.

Although talent shows would be nothing without those big-tear jerking moments, the YouTube clips that can launch careers and Ireland’s Got Talent had the sucker punch of the quiet 13 year old Shaniah who has just arrived in Ireland from the Philippines and dreams of bringing her brothers and sisters to Ireland if she wins the show.

She performed a heart-string-pulling version of True Colours that draws out the first tears of the night from Van Outen but Evelyn Williams from Tallaght is the true queen of the night.

“Am I boring yiz?” she enquires fluffing her snow-white barnet before launching into a show-stopping version of Send in the Clowns. Her emotional, performance ends the show with an attack of the warm-and-fuzzies that has Michelle Visage reaching for her golden buzzer to send Evelyn straight into the semi-finals.

In typical Dublin fashion, the octogenarian gathers herself after breaking down in tears and, with her hair covered in a halo of glitter, says: “I thought that buzzer was going to kill me or something, I’m going to hate going home now.”

Jason Byrne finishes the night by telling her that the whole of Ireland is proud of her, and you get the feeling that maybe ending on a performance like that, Ireland’s Got Talent could actually be a statement rather than a dubious question.

The stories of Irish deportees from the US in 1800s
9