Musician Jake Carter and his dancing partner Karen Byrne have won the latest series of Dancing with the Stars. Video: RTÉ 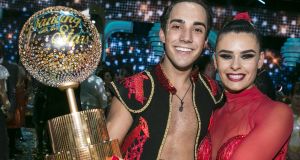 Pop singer Jake Carter and his dancing partner Karen Byrne are the winners of the second season of Dancing with the Stars and with power lifts, perma-tans and glistening, bare-chested abs that just won’t quit, the Liverpudlian and the Dubliner deserve every fleck of glitter on that Glitter Ball Trophy.

Beating comedian Deirdre O’Kane and camogie player Anna Geary in the final, it’s an emotional end to three months of jiving around.

While O’Kane and Geary shine when they tackle quicksteps or Charlestons, Carter and Byrne work it when they slow it down. As we’ve been told many times before, slow and steady wins the race and that’s exactly what they did but the other finalists put up quite a fight.

As an actress and comedian, O’Kane has the upper hand because she can add to the character of the routine she’s doing. So when she injects some Monroe sass into her Charleston to Sparkling Diamonds from Moulin Rouge and Hollywood glamour into her quickstep to Peppy and George from Movie Week in week four, her routines are elevated.

Her showdance with her partner John Nolan, a fusion of tango and paso doble to Let Me Entertain You by Robbie Williams, scores them a low 27. “I could see you dance from your heart, my dear,” says judge Julian Benson, and he’s right. Celebrating her 50th birthday on the show, O’Kane can definitely add dancer to her resume.

From the very beginning, Geary and Kai Widdrington were a cut above the others. To their absolute credit, their tango to David Bowie’s Rebel Rebel from week two – their first routine – is the judges’ choice but their showdance steals the show. “Listen guys, that wasn’t just everything I wanted from a showdance, it was everything I wanted from any dance,” says judge Brian Redmond about their contemporary ballroom showdance to This Is Me by Keala Settle. “So, I’m gonna rob, if you don’t mind, one of Julian’s [phrases], for me that was box office”. The highest of praise to mirror the high score of 30.

The final opens with hosts Amanda Byram and Nicky Byrne and the three excellent judges taking part in a group dance with the professional dancers. It’s light, it’s actually good and it doesn’t take itself too seriously.

This is the tone we were lacking for the last 12 weeks. While the judges relax into their roles, with Benson playing the Louis Walsh, Redmond attempting the Simon Cowell and Loraine Barry balancing the two perfectly, there’s a staleness to Byram and Byrne, who can’t seem to move away from their scripted lines without panicking.

To be a host, you need someone who’s not afraid to go rogue with the format to inject some life into it and when competitors such as Bernard O’Shea fire out jokes with such ease, they need to be able to hit back instead of falling over their words. Plenty of comedians in Ireland who would nail this gig, along with other 2FM presenters such as Tracey Clifford, Stephen Byrne or Bláthnaid Treacy, who presents DWTS behind the scenes show Can’t Stop Dancing, who could all do it in their sleep.

This year, the show should have been called Dancing with the Stars’ Siblings, with Nathan Carter’s little brother Jake and Conor McGregor’s sister Erin competing. Even though the two of them were brilliant from start to finish, there’s a desire to call in “star power” to pull in viewers but the show would work better if they called on big personalities instead.

It’s known that DWTS is turbo craic to be part of so there shouldn’t be a shortage of funny or smart RTÉ employees willing to sign off three months of their life to the art of dance. And while we’re at it, Ballyfermot hero and professional dancer Karen Byrne needs more airtime. For the second year in a row, she’s the best thing about the show.

Dancing with the Stars pulled in an aversge of 553,000 viewers for the series (this figure was tallied before the final) and an average audience of 576,700 people tuned in for the semi final on March 18th, which saw McGregor eliminated. Easing us out of winter, DWTS will always get Sunday viewers but with the apocalyptic weather we suffered in March, we had fewer options for entertainment and tuned in reluctantly.

If the show is commissioned for another series next year, to keep the viewers tuned in – snowstorms or not – the format needs a new whoosh of life and presenters who can keep up with the dancers.