South by Southwest Music festival: the 17 acts that stood at the annual Austin, Texas music extravaganza 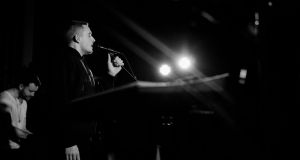 Even past its peak, the annual South by Southwest Music Festival was a prodigious thing, with some 2,000 acts performing in clubs, theatres, hotels and parking lots across Austin, Texas. This year’s festival, the 32nd which wrapped up on Sunday, didn’t have any arena-circuit headliner or overbearing corporate sponsorships, reflecting a dwindling recording business. But that just helped level the playing field for the performers – Austin mainstays, international visitors, punks from multiple generations, singer-songwriters, even some SoundCloud rappers – who still flock to SXSW in hopes of being discovered or getting a boost.

No one listener can choose a definitive “best of” SXSW; even in day-and-night concertgoing, it’s impossible to hear more than a small percentage of the performers.

Dermot Kennedy: Angels, demons, ghosts, memories and all the dimensions of love haunt Irish songwriter Dermot Kennedy. He has a grainy, melancholy voice that can crest with a howling rasp; he’s an acknowledged fan of David Gray. Onstage at SXSW, his songs revealed their folky structures, built on guitar or piano. But they also harnessed the dynamics of electronic dance music, with drumbeats sputtering into double time and choruses that exploded into his howl.

Billie Eilish: This 16-year-old singer has a misty, sleepy voice that can take on a jazzy quaver – part Lana Del Rey, part Amy Winehouse – and she sings about romance as a continuum of desire and combativeness: “I’ll sit and watch your car burn with the fire that you started in me.” Onstage, there was absolutely nothing complaisant about her. As her band played folk-pop tinged with some hip-hop brittleness, Eilish strolled, slouched and crooned with precisely gauged insolence and nonchalance.

Tank and the Bangas: In New Orleans, music is forged in live performance, savouring the immediate effect on a club crowd and sprawling beyond the confines of radio-ready pop. Tank and the Bangas string together grooves from funk, hip-hop, rock and gospel; serious storytelling, self-empowerment exhortations and dance instructions share the band’s exuberant stream of consciousness.

La Cuneta Son Machín: International bands visit SXSW for a chance to draw American attention, and a few dozen ecstatic listeners got to hear La Cuneta Son Machín, a long-running band from Managua, Nicaragua. In frisky cumbias and high-velocity polkas with very brief swerves into rock riffing or rapped vocals, the band sang about food, love, drinking and dancing – especially food. Over what were already speedy tempos, a marimba that sprinted and arpeggiated in double time became a frenetic invitation to party.

Shame: Charlie Steen’s bright blue jacket came off early in the set by Shame, a south London band barely out of their teens. By the time his Velvet Underground T-shirt followed it, a mosh pit was already churning. Shame activates the visceral instincts of punk and proto-punk, with guitars droning and gnashing, drums kicking them into motion and Steen barking lyrics about deep disaffection; between songs he had banter like: “Money first, music second. No, I’m just joking – we’re a guitar band in 2018.” The way he ricocheted around the stage – along with forays on to the shoulders of audience members – Steen should have sported a Stooges T-shirt. Twitching, hunching, crucifying himself with the microphone stand on his shoulders, his moves had the makings of a thousand GIFs.

Lingua Franca: Mariah Parker, who performs as Lingua Franca, merges rapping, spoken word, singing, a social conscience, a sense of humour and a limber physical presence to mix the personal and the political; tracks built on ingeniously manipulated jazz samples are a bonus. She’s a PhD student in linguistics at the University of Georgia; she’s also thoroughly down-to-earth.

Lucy Rose: This singer dared to perform quietly at SXSW, radiating solace and benevolence in her gauzy, luminous voice. She’s an English songwriter who gained a wider audiences by singing some choruses for the rapper Logic. She sang about regretful leave-takings and the possibilities of tender reunions over undulating piano chords or unobtrusive guitar; there were echoes of Feist and Joni Mitchell, but she had her own melodic grace.

Balún: Latin rock remains wide open to ideas not limited by national origin. Balún, a band from Puerto Rico, sometimes used a reggaeton beat, but it was also ready to layer on deep electronic bass tones, the quick strumming of the small Andean guitar called a charango, pealing rock guitars and ethereal soprano vocals, adding up to songs full of positive aspirations.

Ought: The post-punk band Ought, from Montreal, won’t be pinned down from song to song. They can be melodic, singing about something like romance; they can seethe with frustration; they can switch to jagged, stop-start dissonances. And they can find a way toward ranting affirmation: “I’m no longer afraid to die,” declared Beautiful Blue Sky. Whatever the idiom, it sounds as if the band mean it.

The Weather Station: Both serenity and storminess infuse the songs that Tamara Lindeman, from Toronto, writes as the Weather Station. Her band’s folk-rock is steeped in Joni Mitchell and Fairport Convention, weighing the textures of interwoven guitars; her lyrics reveal her interior monologues with a literary, lived-in sense of detail, often pondering the ways a couple’s lives can grow together and apart: “An ambulance passed on the street, and you took my arm reflexively,” she sang in Thirty.

Jackie Mendoza: A member of the band Gingerlys, Jackie Mendoza backed herself for this show with her own laptop tracks. They were dense concoctions that changed radically from song to song, touching down at times in dance beats before drifting into more abstract zones, and then getting reeled back by her straightforward vocal lines, with lyrics in English and Spanish.

Jade Bird: Jealousy and separation sparked song after song in a showcase set by Jade Bird; she even had a pre-emptive breakup song: “Knew we had to stop before we started/to torture each other,” she rattled off in Cathedral. She’s an English songwriter with a country-rock streak and a furious rasp when she gets riled, which was fairly often in the songs she unveiled: “Baby thanks for leaving me/Happy anniversary,” she snarled.

Superorganism: Deadpan silliness met hipster cool when the London group Superorganism took the stage, mostly in sunglasses and hoodies. Over pop tracks that could sound as if they were concocted from toys, they sang about 21st-century concerns like social media (Everybody Wants to Be Famous) and ignoring peer pressure (Nobody Cares, The Prawn Song), with backup singers doing not-so-synchronised dance moves. Clever and calculated as the songs were, they kept a do-it-yourself spirit.

Stella Donnelly: This Australian songwriter has a modest, guileless voice and folky tunes, but her songs can quickly flare into resentment and, if necessary, open anger. In Boys Will Be Boys, a graceful waltz, she comforted and defended a sexual-assault victim, while in Mechanical Bull she warned that she’d “throw you all off me.” She was chipper but adamant.

Marlon Williams: Desperate declarations, vintage chord changes, dramatic buildups and guitar tremolo filled the songs of Marlon Williams from New Zealand: “Now that you’ve left me, what can I say?/What can I do, when I’m lost without you?” His voice was a long-breathed tenor shading smoothly into falsetto; his pants showed a lot of ankle. Brokenhearted and a little geeky, he was a fond throwback to Roy Orbison and Chris Isaak.

Soccer Mommy: Sophie Allison’s first recordings as Soccer Mommy were homemade, seemingly tentative songs about yearning and deep insecurity. But with her 2018 album, Clean, she found new self-assertion and assembled a working band, which provided some musical and emotional armour in a miniset concentrating on her rockers.

Mallrat: All the awkwardness and annoyances of suburban teenage life find their way into the songs of Grace Shaw, a 19-year-old Australian who calls herself Mallrat. She worries, and doesn’t worry, about fitting in or being liked; she mocks the comforts of sterile surroundings. Her songs turn mild rap cadences into singsong melodies, set to vamps that match guitar or piano chords with perky electronics. And during the festival she performed at a mall store.