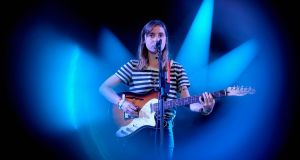 Julien Baker: 'For so long I struggled with these two parts of myself that seem inherently contradictory.' Photograph: Getty Images

When Julien Baker was 17 she accidentally drove off the road and into a street light. The pole fell on the car, shattering the windscreen and splitting the roof. Had it struck a few more inches to the left, Baker would probably have been killed.

She wrote a song about the experience, called Blacktop in memory of her ruined vehicle. It appeared on the Memphis, Tennessee singer’s 2015 debut album, Sprained Ankle, alongside material chronicling Baker’s heavy drinking and her struggles to reconcile her Christian faith with the fact she was gay.

“It informed my life as a person,” Baker (22) of the accident. “I’ve totalled five cars in five years. One time I was sitting at a stop light and a drunk driver caved in my driver door.

“That other time [as recounted on Blacktop] I hit a street lamp going 15 miles an hour. It fell inches from my head and caved in the entire car. When that happens and everything collapses in, you’re thinking, ‘I’m gonna die, like, right now . . .’ It’s crazy the perspective it forces.”

Baker’s music is all about life and the perspectives it forces. On both Sprained Ankle and last year’s Turn Out The Lights, she transposes spiritual angst, break-up blues and 3am panic attacks into emphatically expressive pop. Propelling the music is her stark, almost staccato guitar and a voice brimming with a catharsis that feels too large, too wrenching, for her slight frame

“I thought my first album was going to be a flop,” she says. “I was in a band and I expected they were going to make the successful album – not me as a solo artist. I told it to the manager of the label – ‘this record will fail’. But here we are. What an interesting turn of events it is.”

“Interesting” hardly does it justice. She made her US network debut on Stephen Colbert’s show in January, has been feted (twice) in the New Yorker and this month featured, alongside SZA and Taylor Swift, in a New York Times Magazine spread titled “25 Songs That Tell Us Where Music Is Going”.

With zero promotion, she also sold out Whelan’s in Dublin last November. Everyone in the room knew the words to all the songs by heart. Expect her fanbase to have further expanded when she returns for two Vicar Street dates next week, supporting Belle and Sebastian.

“Dublin was my favourite show of that tour – it was unique and it was special. I love it when people sing along and are engaged and participatory. It makes me feel less of a spectacle.”

Baker is the kind of upfront Christian who will cheerfully quote scripture at parties (“and everyone says . . . ‘aah, look at the time’”). In the context of her sexuality, this has cast her as somewhat of a novelty.

“I don’t want to be a gay artist,” she says. “I just want to be an artist. I don’t want to be the queer Christian artist. There are so many other themes on [Sprained Ankle]: familial heartbreak, your everyday generic heartbreak, substance abuse . . . People will hand me articles that say, ‘surprise! Julien Baker is magically queer and retains her faith – read all about how’. It’s almost a gimmick.”

She’s a little agitated by this. Nonetheless, she has made peace with the fact that a gay Christian indie singer from what is perceived as America’s conservative heartland – Memphis actually voted for Hillary by a margin of 100,000 in the election – is something people still point and stare at.

“First of all, everyone has a religion,” she says. “Even you profess to have no religion . . . well, maybe your religion is the worship of your career. So religion is a) inescapable and b) just a name for how we live out our convictions.”

Baker remained closeted from her family until she was 17. In high school, a friend was packed off to Refuge – a centre (now defunct) where gay people were “cleansed” through Bible study. Baker wasn’t quite sure how her own parents would react were she to come out.

“For so long I struggled with these two parts of myself that seem inherently contradictory,” she says. “The way I saw it, I could be one or the other. I finally reconciled these two things by realising that I am Julien Baker a whole person.”

As she wrestled with herself, she fell into a spiral of substance abuse: mostly booze and cigarettes (plus a few tattoos that she laments). Sprained Ankle is largely about her working through these issues – processing the pain, the regret, the embarrassment.

“Singing about those things was a way to eradicate the shame. I hope the songs aren’t indulging in a fantasy of romantic elements of suffering or substance abuse. But if I had never experienced all of that I would have never got to talk to people about it.”

The surprise was that when she did come out, her father reached for the Bible and told her, “I’m gonna prove to you that you’re not going to hell”.

Baker is earnest but no more intense than the average artistically-inclined 22-year-old. Musicians, it is true, are rarely as two dimensional as their public personas. Nevertheless, her soft spoken, almost chirpy manner, stands in contrast to the devastated figure she presents on stage.

“Music makes me feel more balanced,” she says. “I can put all of those very bleak feelings into songs. It’s a coping mechanism. I think of myself as a goofy person – my whole life is like a comedy of errors, like a Dumb and Dumber skit.”

Several days after the Stoneman Douglas high-school shooting in Florida, she tweeted a message at the state’s junior senator, Marco Rubio: “Why is preventing gun violence less important to you than the funding you get from organisations that enable & perpetuate that violence?”

Tennessee, as it happens, is an outlier when it comes to mass shootings. In 1995, four years before Columbine, a 17 year-old armed with a Remington Viper semi-automatic rifle entered a school in Lynnville, four hours from Memphis, and shot dead a teacher and injured another student, before being tackled by a classmate.

“It feels like in Tennessee that there are guns in everyone’s house,” says Baker. “As a I child it seemed to me there were guns everywhere I visited.

“Not in the way that everyone is preparing for the apocalypse – but there would be a shotgun or a hunting rifle or maybe someone would have a pistol. I don’t understand why people cling to gun worship as symbolic of freedom . . . The fact automatic rifles are still readily available – ridiculously readily available – means that people are dying every single day.”

Baker is in her early 20s but could pass for a precocious high-school student. The entertainment industry, as we are learning, can be cruel to young women. Happily, the Memphis punk scene in which she came up was a supportive place. That said, as her profile has grown she has bumped up against entrenched misogyny.

“There have been sound engineers that have explained to me how to plug in a microphone. I don’t feel the need to condescendingly tell all of these people that I went to audio engineering school.

“But still – it happens. It’s frustrating and is something I’ve always been super sensitive to. I’ve felt the insane need to prove myself a 1,000 times harder. When I was 15 and I played in a band I would do these annoyingly complex solos – like every song had to have a crazy Slash solo. I needed everyone to know that I was a girl who could play guitar well.”

Micheál Martin wants us to have ‘a meaningful Christmas’ – but what does that mean?
8