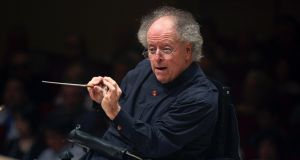 It was last December when James Levine, the music director emeritus of the Metropolitan Opera, in New York, was suspended from his duties. The Met, where the celebrated conductor first worked in 1971, had started an investigation into allegations of sexual misconduct.

Accusations of this kind had surfaced repeatedly over the years, in Europe (where Levine had been chief conductor of the Munich Philharmonic) as well as the United States, without ever gaining enough traction to cause any real problems for him.

Levine has at all times strenuously denied any wrongdoing. But articles published in the New York Post and New York Times in December gave voice to the alleged victims. The Met suspension was a watershed in Levine’s career, and he has since lost work with other institutions.

Descriptions of the ‘Levinites’, as the conductor’s young musical acolytes were called, make it all sound like a cult, complete with sexual rituals and loyalty tests

Part of the conductor’s career was with the Boston Symphony Orchestra, and earlier this month the Boston Globe published an article delving into details of the years 1965-72, when he taught at the Cleveland Institute of Music.

As the introduction to the article explained, “They were known as ‘Levinites’ – the young musical acolytes who bent to the will of James Levine in all things, back when the conductor was the brightest emerging star in conducting. From the outside, it seemed a charmed circle; the reality inside was otherwise: dark, sexually charged, and often demeaning.”

Descriptions of the Levinites make it all sound like a cult, complete with sexual rituals and loyalty tests. The leading American cellist Lynn Harrell is quoted as saying, “I just wish it could have been what it seemed to mean at the time. It’s all faded now. It’s very much a tragedy.”

On March 12th the situation escalated. The Met fired the conductor. Its statement said, “After considering the findings of a thorough investigation conducted by outside counsel that lasted more than three months, the Metropolitan Opera has terminated its relationship with James Levine as music director emeritus and artistic director of its young artist programme.”

The investigation, which interviewed more than 70 people, “uncovered credible evidence that Mr Levine had engaged in sexually abusive and harassing conduct both before and during the period when he worked at the Met”.

It also uncovered “credible evidence that Mr Levine engaged in sexually abusive and harassing conduct towards vulnerable artists in the early stages of their careers, over whom Mr Levine had authority. In light of these findings, the Met concludes that it would be inappropriate and impossible for Mr Levine to continue to work at the Met.”

The conductor’s retaliation was not long in coming. Three days later he served notice of a civil suit demanding close to $6 million, plus damages for reputational injury, emotional distress, humiliation, pain and suffering, as well as punitive damages, interest and costs.

Levine’s contention is that “the Met’s so-called investigation amounted to nothing more than a kangaroo court”. There has obviously been bad blood between Levine and the Met’s general manager, Peter Gelb. Levine says that the investigation “was structured simply to justify its unauthorised suspension of Levine, post-hoc, and ultimately fulfil Gelb’s long-held plan to oust Levine from the Met and completely erase his legacy from the organisation”.

There are descriptions of Trump-like behaviour, including the fact that the Met “publicly terminated Levine on March 12th, 2018, without the consideration of a phone call”. The Met fired him “merely by notifying his agents at the same time it issued a press release announcing to the world its firing of Levine and the purported finding of its one-sided investigation”.

The core of Levine’s case is that the Met “does not have the right under the music director agreements to terminate or suspend Levine as emeritus music director or to prevent Levine from performing the emeritus services, based on allegations of misconduct or wrongdoing by him”.

The accusations against Gelb are highly personal. It’s alleged that he sought to “marginalise Levine’s substantial influence at the Met” and dismantle the team he had created, and that Gelb did this “in order to push forth his own personal priorities of production, without the benefit of musical or dramatic training, as well as knowledge or experience, and for Gelb’s personal aggrandisement”.

There are also accusations that “Gelb regularly called into question Levine’s ability to continue conducting as a result of his Parkinson’s disease and senior age. Instead of supporting Levine, Gelb used Levine’s physical condition and age to intimidate Levine and pressure him to step down as music director and ultimately retire from the Met.”

And beyond this there are allegations of name-calling and verbal abuse. Curiously, though, while Levine excoriates Gelb, he also uses some of Gelb’s recent press statements in his defence.

The Met’s response has been a brief statement that ends as you would expect. “The Met intends to defend this case vigorously.”