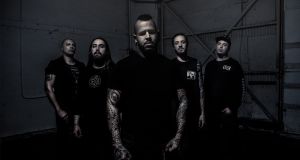 On the night of Sunday, January 14th Tommy Vext went to bed “like a kid on Christmas Eve” knowing The Cranberries lead singer Dolores O’Riordan was about to record his band’s version of one of her best-known songs.

O’Riordan had agreed to add her vocal to Vext’s band Bad Wolves’ version of Zombie.

Instead, the singer was found dead in her hotel room in the Hilton Hotel in London at 9.05am on the following morning. She was just 46.

The band, like most people in the music fraternity, were completely blindsided by the tragedy.

They pondered what to do next and decided after much deliberation to release the version of the song they had originally recorded in tribute to O’Riordan and to give any proceeds from Zombie to her three children.

What has happened since has been unprecedented for any heavy metal band which veers towards the extreme end of the spectrum like Bad Wolves.

Metalcore bands like Bad Wolves tend not to expect or even court mainstream appeal.

The band, based in LA, is something of a heavy metal super group comprising five members who had been in previous bands. Vext had been in Divine Heresy and lately as stand in vocalist for Five Finger Death Punch who have had a lot of success on both sides of the Atlantic.

“I don’t think people expected a lot of these things to happen,” she said. “So many things have been unexpected. We didn’t expect her to sing on it. We didn’t expect what happened to her. It has been a bittersweet rollercoaster.”

They have yet to release even their debut album, yet their version of Zombie has recorded a number of notable firsts.

The song was the number 1 rock, metal and overall song on the iTunes chart in the US, a first for a heavy metal band in a pop-dominated era.

It has been the No.1 rock song streaming in Ireland, the UK, Germany, France, Italy, Switzerland, Norway and Australia to name many territories.

The song’s video, which cleaves very closely to the original as released by The Cranberries, has racked up 14.5 million views on YouTube.

“It is hard to believe and it is hard to remember,” said Vext of the unexpected success they have had.

They have arrived in Dublin for an appearance on the Late Late Show on Friday night.

Their appearance on the world’s longest running chat show will also be a notable first too for a heavy metal band.

“It is a strange thing. All of us come from extreme metal backgrounds so we’re not accustomed to this kind of response when it comes to radio and television,” he said.

“We wanted to honour her and make her proud. We have been watching this thing happen from home. We see young people discovering the song for the first time and people our age and older rediscovering the song and so people are connecting to it on that level.

“People are connecting to it through the grieving process of mourning the loss of Dolores.”

For the rest of the metal fraternity, their debut album Disobey, will be released in May. In the meantime they have released an EP False Flags Volume One which is out on all platforms on Friday.