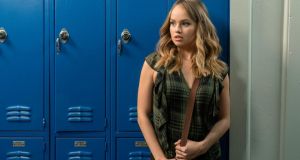 One of the recurring images on Netflix’s new show, Insatiable, is that of the show’s heroine, Patty, played by Debby Ryan, gorging on food.

“While my classmates were out losing their virginity,” she says in the first episode, “I was at home stuffing another hole.”

The show’s palpable disgust for Patty’s desire for food is visceral. Throughout the series, anytime Patty feels out-of-control, angry, desperate or sad, she immediately begins to binge, whether it’s handfuls of crawfish or gobs of birthday cake. Each time Patty goes on a binge, the camera hones in on her mouth as she shoves food in it, in a way that seems both joyless and fetishistic.

Patty’s mouth is the iconic image for the title scene, too. At the start of each episode we see her beautifully made-up mouth with the word “Insatiable” in front of it. In one opening, Patty holds a match between her lips. In others, we see her mouth biting or inhaling the words in front of it. Each time, the trailer closes on her smile, as she shows off perfectly white teeth.

Though the trailer for the series, which prompted a furious outcry among concerned viewers, seemed to suggest that this was a story of an overweight girl getting skinny and seeking revenge on those who bullied her, Insatiable is more accurately a story of a young woman who has a binge-eating disorder.

In fact, one of the more offensive aspects of the series (and there are many aspects that are offensive) is that fatness itself is synonymous with disordered eating. Throughout the series, Patty’s weight is perceived as a kind of moral failing, as evidence that her desires are just completely out of control.

Certainly, one of the “jokes” of the series is that thin Patty is flailing just as much as “Fatty Patty” did. Though she suddenly has tons of positive reinforcement about her looks, she doesn’t feel good about herself or her body. The years of being bullied still haunt her, and her response to any and all stress or setbacks is to act out in ways that are vicious, cruel or just plain crazy.

Insatiable is clearly striving to be an edgy satire of our image-obsessed culture and our constant need for more, but the candy-coloured veneer of the series never offers viewers an actual escape from the toxic tropes it attempts to skewer. In fact, the show often seems intent on embodying the very stereotypes that it claims to be dismantling.

Patty is shown being teased mercilessly when she is fat, and then ogled constantly after she drops the weight. Her character has daddy issues, is a cutthroat and cruel pageant contestant, and has very few interests, ideas or thoughts outside of her looks (except for the fact that she really loves Drew Barrymore). The way that the camera focuses on Patty’s body in various scenes is often odd and distracting, and seems to emphasise that the viewer shouldn’t really be able to see Patty beyond her looks either.

Other characters in the series are also presented as tropes that don’t get complicated in ways that are particularly interesting, and yet aren’t campy enough to get played off as simply absurd. We meet “trailer trash” characters with thick southern accents and tacky wardrobes, and the wealthy white collar strivers who are just as seedy and ridiculous under their fake veneer of elegance.

We see the world of beauty pageants as being fake, charmless and ugly. Religious institutions are shown to be judgmental, foolish and patently unhelpful in the quest for spiritual enlightenment. There are jokes about race, sexual orientation and sexual molestation, all of which seem intent on being shocking, without being particularly funny. There are also a lot of dirty jokes based on a fast food place called Taco Weiner.

Insatiable’s best qualities are its quick-paced plot and the fact that it doesn’t take itself too seriously. Its worst aspect though, and one that I view to be an irredeemable one, is the fact that it pretends that any of its messages are intended to help teenagers navigate a cruel world or feel better about themselves.

In reality, Insatiable isn’t skewering the ridiculous expectations placed on teen girls; it’s merely reiterating them. It doesn’t provide a sensitive and humorous reflection on the experience of binge eating disorder; it’s placing Debby Ryan in a fat suit for cheap laughs.

Insatiable’s arrival comes after Marti Noxon’s Dietland, a fantastic takedown of fat-shaming and the cruelty of beauty culture, and a few months after a company decided to start marketing weight loss reduction lollipops to teen girls and young women using bright pink colours. In response, you had some celebrities like Kim Kardashian West jump on the opportunist bandwagon (after receiving a lot of backlash from an Instagram post supporting the product, West deleted her post) and others like Jameela Jamil posting outrage about the ways that young women are taught to feel bad about themselves.

After the trailer for Insatiable aired, hundreds of thousands of people signed a petition for Netflix to cancel the series, arguing it would be dangerous for teen girls and anyone who struggles with eating. At first blush, this type of response is heartening, but I’ve been a cultural critic long enough to know that an explosion of cultural discourse, no matter how well-written and smart, isn’t necessarily enough to actually facilitate cultural change. In fact, controversy itself can often be just as effective in drumming up viewers as quality programming, and I wonder if the petition against Insatiable itself may actually end up getting this slight series more buzz than it honestly deserves.

Insatiable is available on Netflix on 10 August